If These UFC Rumors Are True .. 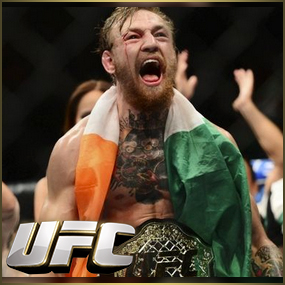 … then Conor McGregor is headed for the fight of his life!

We don’t like to post stories based on speculation, but several sources are claiming UFC 197 in Las Vegas is going to be a huge event. According to those sources, UFC Featherweight Champion Conor McGregor will move up in weight and challenge Lightweight Champion Rafael dos Anjos for the 155-pound championship. In the co-main event, Women’s Bantamweight Champion Holly Holm will defend her title for the first title, with Miesha Tate as the challenger. If these reports are accurate, these two main attractions assures UFC a monster buyrate in early 2016 even before they get to UFC 200 in July. Sources have also confirmed the actual contracts for the fights have not yet been signed, which could throw the whole report out the window. But UFC is apparently planning on those two events, according to long time MMA reporter Jeremy Botter.

Of course, we’re HustleTweeting about UFC 197, and you’re more than welcome to join the conversation by following the Hustle on Twitter HERE or write to us directly at hustleoncrave@gmail.comHey, have you checked out the Hustle’s Ultra High Quality YouTube Channel, with exclusive videos featuring the #HUSTLEBOOTYTEMPTATS SUPERMODEL OF THE YEAR … OUR WORLD EXCLUSIVE WITH MIKE TYSON … BROCK LESNAR’S “HERE COMES THE PAIN” … ICE-T AND COCO’s SEX SECRETS … MMA BAD BOY NICK DIAZ … the list goes on and on, so if you’re not subscribing, you’re missing something … and by the ways cheapos, it’s FREE! Yes, absolutely 100 percent FREE! What are you waiting for? Check it out HERE!