Iovine BEATS Everyone Else in Music ... AGAIN! 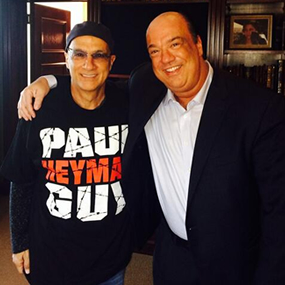 There are very few constants in the ever-changing world of music, but for obsessive music fans (like your humble reporter right here), perhaps the words of our very own Hustler De Tuti Hustlers Paul Heyman can provide the greatest insight into the industry you’ll ever find … “Jimmy Iovine knows what he’s doing. Everyone else can just play catch-up with him!”

Indeed, the man who created, sold, bought back, sold, bought back, sold (we can go on for days here) Interscope and who to this day is the reigning king of music executives has found newfound fame as the smartest businessman in Hollywood (not just in music), as the entire entertainment community marvels over the fortune Iovine and partner Dre have amassed with Beats Music. According to an astonishing report posted by BLOOMBERG, over 1,000 people per day signed up as paying customers for the streaming-music service before any free trials, and get this … Beats is also reportedly  keeping more than 70 percent of AT&T free-trial users as paying customers once those introductory terms end. Beats Music launched publicly on January 21 with AT&T offering “Family” customers a 90-day free trial and individual AT&T wireless customers a 30-day free trial. The 70 pecent retention figure has to be considered beyond even optimistic expectations, as Beats, priced as a $9.99-a-month service, has done a fantastic job at converting free users to paying ones

Just by way of example, a report in May, 2013 demonstrated that Pandora’s paying subscribers surpassed 2.5 million at a time when it had 70.1 million active listeners, or about 3.6 percent. Spotify hasn’t updated its subscriber stats in a year, but at that time it had 6 million paying members out of 24 million active users, or 25 percent. Considering Pandora and Spotify both have quite a few more registered users than active ones, those percentages would drop more.

Both Spotify and Pandora have endeavored to provide more features to users who aren’t paying. It should be noted that Pandora makes less than a fifth of its revenue from subscriber fees, and instead brings terrestrial radio advertising dollars over to its free, ad-based online radio service.

None of that multi-tiered marketing for Iovine and Dre. It goes like this. You wanna listen to Beats? You pay for the membership!

According to an oft-quoted report, Beats Music combined the technology of on-demand music service MOG with the same kind of marketing onslaught that made Beats headphones a hit for longtime music exec Jimmy Iovine and musician Dr. Dre. Pitching itself as having a sharper, human curatorial touch than algorithm-driven streaming services like Spotify or Pandora, Beats Music has been relying on its crucial AT&T partnership and flashy advertising that targets a mainstream audience … a Super Bowl ad with Ellen DeGeneres being the greatest example  … as it attempts to break into an already crowded field for streaming music.

Of course, we’re HustleTweeting about Beats Music and you’re more than welcome to join the conversation (and you have to realize, this is one ridiculously lively conversation) by writing us on twitter HERE or write to us directly at hustleoncrave@gmail.com  Hey, have you checked out the Hustle’s Ultra High Quality You Tube Channel, with exclusive videos featuring OUR WORLD EXCLUSIVE WITH MIKE TYSON … BROCK LESNAR’S “HERE COMES THE PAIN” … ICE-T AND COCO’s SEX SECRETS … MMA BAD BOY NICK DIAZ … the list goes on and on, so if you’re not subscribing, you’re missing something … and by the ways cheapos, it’s FREE! Yes, absolutely 100 percent FREE! What are you waiting for? Check it out HERE!