It's a Good Day To Be Jeff Bezos 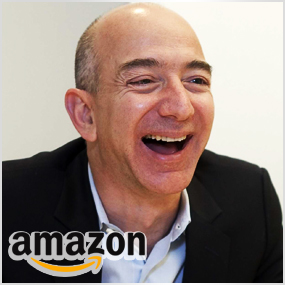 Someone has a reason to scream out “YAHOO!”

Amazon CEO Jeff Bezos is now, according to those who rank such things, the fifth richest person in the world, thanks to gaining more than SEVEN F’N BILLION DOLLARS IN NET WORTH on Thursday as Amazon stock went through the roof during after-hours trading. Bezos is now estimated to have a net worth of $50.3 billion dollars. It all happened during  Thursday’s earnings call,  as Amazon surprised investors by reporting a net profit and topped analysts’ sales estimates for the second quarter, causing Amazon stock to increase more than 18% in after-hours trading. Amazon reported a second quarter net income of $92 million, or 19 cents per share. Bezos now moves into 5th place on the World’s Richest People list, knocking Oracle CEO Larry Ellison down to 6th place, with a paltry $48.6 billion. Bezos founded Amazon in 1994, but we’re HustleTweeting about him NOW, so please feel free to join the conversation by following the Hustle on Twitter HERE or write to us directly at hustleoncrave@gmail.com Hey, have you checked out the Hustle’s Ultra High Quality You Tube Channel, with exclusive videos featuring the #HUSTLEBOOTYTEMPTATS SUPERMODEL OF THE YEAR … OUR WORLD EXCLUSIVE WITH MIKE TYSON … BROCK LESNAR’S “HERE COMES THE PAIN” … ICE-T AND COCO’s SEX SECRETS … MMA BAD BOY NICK DIAZ … the list goes on and on, so if you’re not subscribing, you’re missing something … and by the ways cheapos, it’s FREE! Yes, absolutely 100 percent FREE! What are you waiting for? Check it out HERE