James Romano Debuts with His Take on the New Ghostbusters Trailer 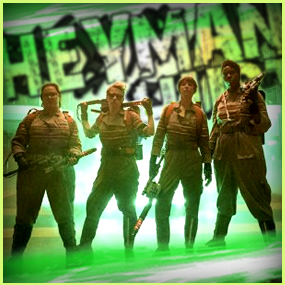 Who You Gonna Call?

The long-awaited first trailer for the all-female reboot of Ghostbusters dropped this morning. After years of anticipation, we finally have our first look at Paul Feig‘s reimagined version of the universally beloved supernatural comedy franchise and it has us feeling a bit… weird, to say the least.

On one hand, all the wild and creepy callbacks to the original two films are present: an eclectic and eccentric crew of ghost-catchers, the funeral-hearse-turned-Ecto-1, proton packs, New York City being razed into a paranormal playground, a badass slowed down EDM rendition of the classic theme, and even a quick glimpse at everybody’s favorite gluttonous ghoul Slimer.

On the other hand, some of us wish they’d just cross the streams so that every molecule of this thing would explode at the speed of light. They just had to put an Exorcist-esque head-spinning Melissa McCarthy in this movie, didn’t they?

Saturday Night Live stars Kristen Wiig, Kate McKinnon, and Leslie Jones join McCarthy as the new team of poltergeist purgers. The reboot also features Thor himself, Chris Hemsworth, as well as cameos by some of the OG cast including Bill Murray, Dan Akroyd, Ernie Hudson, and Sigourney Weaver (albeit all likely to NOT reprise their roles from the original installments, instead rumored to be portraying polar opposite random characters ranging from debunkers of the paranomral to conspiracy theorist taxi drivers).

Admittedly, while we might have our reservations, we’re not exactly ruling out that the film could end up ruling. Despite probably paling in comparison to the timeless originals, it does at least have the potential to be pretty fun, right? If you ain’t ‘fraid of no ghosts, or Melissa McCarthy‘s head rotating 360 degrees, check out the trailer below and decide for yourself. Of course, we’re HustleTweeting about Ghostbusters, and you’re more than welcome to join the conversation by following the Hustle on Twitter HERE or by hitting LIKE on our hyper-interactive Facebook page HERE!