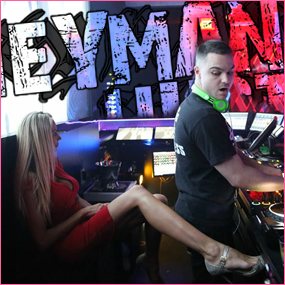 “The Eye” Focuses on The Hottest Party in Miami!

While the world learned this week that third-generation superstar Curtis Axel is the newest Paul Heyman Guy in WWE, the music industry has known for quite some time that second generation prodigy JAMIE IOVINE IS A PAUL HEYMAN GUY! When Sean Combs needed someone to spin for him live at this year’s WrestleMania, he didn’t go in-house at Bad Boy Entertainment, he reached out for “Paul Heyman Guy” Jamie “The Eye” Iovine!

The Wall, which is located at The W South Beach, is the hottest club in Miami right now, and Jamie was a “Paul Heyman Guy” t-shirt-wearing master of ceremonies ’til the wee hours as party-goers tore up the floor to his special mix. Readers of THE HEYMAN HUSTLE can download Jamie’s debut album HERE … and you can follow Jamie “The Real Eye” Iovine on Twitter (if you dare) HERE!

Of course, we’re HustleTweeting about Jamie “The Eye” Iovine, and you’re more than welcome to join th conversation by following us on twitter HERE or write us directly at hustleoncrave@gmail.com  Hey, have you checked out the Hustle’s Ultra High Quality You Tube Channel, with exclusive videos featuring OUR WORLD EXCLUSIVE WITH MIKE TYSON … BROCK LESNAR’S “HERE COMES THE PAIN” … ICE-T AND COCO’s SEX SECRETS … TEEN SENSATION TAYLOR MOMSEN … UFC BAD BOY NICK DIAZ … THE WALKING RIOT MISSY HYATT if you’re not subscribing, you’re missing something … and by the ways cheapos, it’s FREE! Yes, absolutely 100 percent FREE! What are you waiting for? Check it out HERE!