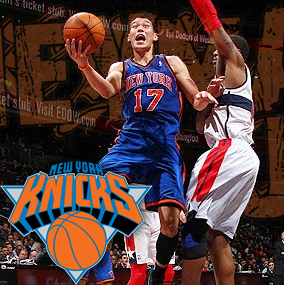 The New York Knicks New Point Guard Is The Hottest Sports Superstar in The Big Apple!

The New York Knicks NBA Basketball team has a brand new star, and it’s point guard Jeremy Lin. The 23 year old guard, the first American-born player of Taiwanese and Chinese heritage in the NBA, has become an overnight sensation in the largest media market in the world.

Lin has risen to a level of superstardom few achieve, not only starting the past two games for the Knicks in the wake of a groin injury to Carmelo Anthony and Amare Stoudemire being away from the team until Monday following the death of a brother in a car accident, but also because he scored 28 points and passed out eight assists in a victory over Utah. Lin then followed up that performance by scoring 23 points and 10 assists in a triumph at Washington, becoming the first NBA player since LeBron James with at least 20 points and eight assists in his first two starts.

“I wanted to this year establish myself into the rotation and not be the 15th guy. That’s what I felt like I could do,” Lin said. “But the reality was I was the 12 to 15th guy on the team and I got waived a couple times.”

But after Houston and Golden State gave up on him, Lin has spectators clapping in delight now at the former Harvard University standout, who played 28 games with Golden State last season.

“When I get on the court and I play with our team, none of us are thinking about all of this other stuff that’s going on,” Lin said. “It’s just basketball and that’s what we enjoy.”

The Knicks are enjoying Lin’s moment in the sun as well.

“I love it. I’m glad that it’s happening to him, in all honesty,” said Tyson Chandler of the Knicks.  “It couldn’t happen to a better guy. The way he goes about things, you would never know all of this stuff was going on. What he brings to this team is invaluable, the spacing on the floor, the ball movement — he really puts everybody back in their natural position. He has a huge impact because he has everybody feeling confident again.”

And if you think New York is gripped by LinSanity, wait until you hear about the Linsufferable task of finding a Jeremy Lin jersey in NYC. Ain’t happening, folks. This point guard is a merchandise bonanza!

Lin jerseys were made available at three Modell’s stores in Midtown and at the MSG souvenir shops today. Just today. And Rich Lampmann, a spokesman for Modell’s, said “Obviously, New York is excited about Jeremy, and we’re going to give the fans what they want.”

Worse yet, Modell’s is not a sponsor of the Hustle. And here we are promoting their stores. You bastards!

Modell’s is pulling a batch of the jerseys off the production line early in order to satisfy the red-hot demand. They’ll be on sale at the Modell’s stores on West 42nd Street, East 42nd Street,  and the store at Broadway at West 34th Street. And my ass. They’re selling the jerseys in my ass. OK, not really my ass. But WTF? Where’s our sponsorship money?

OK, back to the story.

“Because he’s come out of nowhere and he’s already a fan favorite, we’re bringing in an initial shipment of jerseys,” Lampmann said. Yet no comment about advertising on the Hustle.

And that, we must admit, is LinSane!