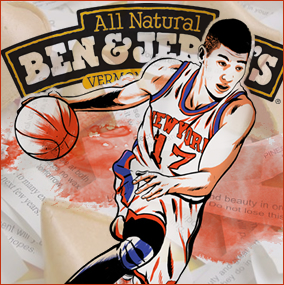 Floyd Mayweather is a rather polarizing figure in sports. The undefeated boxer recently went off on a tangent about Jeremy Lin, and the media ate it up. MAYWEATHER STATED JEREMY LIN WAS A SENSATION BECAUSE HE’S ASIAN and that “Black players do what he does every night and don’t get the same praise.”

It would appear as though Lin is now learning what it’s like to be a minority in America, and the downside that goes with it.

In the latest bit of negative LinSANITY to hit our country, Ben & Jerry’s recently began selling a new flavor of frozen yogurt at its Harvard Square shop in honor of basketball’s sudden sensation, Jeremy Lin, who as everyone must know by now is a Harvard University graduate.

But ever so briefly, the store committed an ethnic faux pas by including “fortune cookie pieces’’ mixed into its “Taste the Lin-Sanity’’ frozen yogurt. The ingredient was quickly replaced by waffle pieces.

“There seemed to be a bit of an initial backlash about it, but we obviously weren’t looking to offend anybody and the majority of the feedback about it has been positive,’’ Ryan Midden, Ben & Jerry’s general manager for Boston and Cambridge, said yesterday in one of the hundreds of phone interviews he probably had to deal with.

Midden said the primary reason for changing the cookie ingredient was because “a couple of [pints] got returned because the cookies got so soggy.’’

CLICK HERE FOR THE HEYMAN HUSTLE’S VERY OWN “HOLLYWOOD CHARLIE” MAKING A CABARET CONFESSION ABOUT LOOKING FOR LinSANITY IN ALL THE WRONG PLACES!

In an email, Midden stated “We are very excited to celebrate the Harvard basketball program, as well as a local celebrity with our limited-time batch.’’

He said customers can shoot at a basketball hoop set up inside the store located near Lin’s alma mater to try to earn a $1 discount on a pint of the new flavor.

The Harvard Square location will continue the promotion with the basketball hoop through the remainder of Harvard’s basketball season. Midden said that a portion of the new flavor’s proceeds will be donated to a Cambridge nonprofit to be named later.

And so the LinSANITY continues!

Of course, we’re HustleTweeting about the latest LinSANITY to hit the headlines, and you’re more than welcome to join the conversation by following THE HEYMAN HUSTLE on Twitter HERE or write to us directly at hustleoncrave@gmail.com  Hey, have you checked out the Hustle’s Ultra High Quality You Tube Channel, with  exclusive videos featuring BROCK LESNAR’S “HERE COMES THE PAIN”  … ICE-T AND COCO’s SEX SECRETS … THE ULTIMATE WELTERWEIGHT BAD ASS NICK DIAZ … CONTROVERSIAL TEEN SENSATION TAYLOR MOMSEN … LEGENDARY MMA PIONEER FRANK SHAMROCK … THE WALKING RIOT MISSY HYATT … if you’re not subscribing, you’re missing something … and by the ways cheapos, it’s FREE! Yes, absolutely 100 percent FREE! What are you waiting for? Check it out HERE!