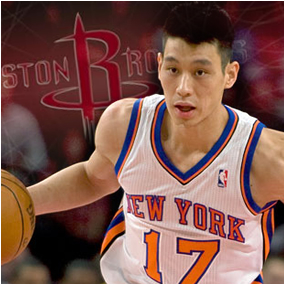 In an editorial that will posted in this morning’s edition of THE NEW YORK DAILY NEWS, famed sports columnist Mike Lupica declares Jeremy Lin should not re-sign with the NY Knicks, and should instead go play for the Houston Rockets!

“You keep hearing about the boatloads of money that Jeremy Lin will make for the Knicks, from the jerseys he sells here all the way to the far reaches of the Asian market, as if we are somehow talking about a new basketball app and not a Harvard point guard,” Lupica, one of the most respected sports writers not only in The Big Apple, but in the entire sports world, states in his column, which is published in this Sunday’s newspaper, “But this decision shouldn’t be about that kind of business. It can only be about the basketball business. If it’s not, then the Knicks make it for all the wrong reasons, and waste valuable money, especially down the road, against the salary cap.”

CLICK HERE FOR AN INTRODUCTION TO THE LINsanity THAT SWEPT THE BIG APPLE!

“This isn’t to say that the Knicks shouldn’t match the back-loaded offer the Rockets have made for Lin,” Lupica writes. “But if they do, then they have to believe that in a point guard league, that Lin can be one of the better point guards by the third year of this contract, when he starts making more money. Because if they don’t — and if he’s not — Knicks fans aren’t going to want to hear about how Lin helped them grow their brand in Taiwan.”

The longtime voice of the New York Sports Fan, Lupica also notes “The Knicks fans who fell in love with Lin and are still in love with the kid care only that he came along and helped save their season when he did, put a kind of life into the Garden that neither Amar’e Stoudemire nor Carmelo Anthony — two previous saviors — managed to do.”

CLICK HERE FOR THE HEYMAN HUSTLE’S REPORT ON JASON KIDD RETURNING TO THE KNICKS!

CLICK HERE FOR OUR BREAKING STORY ON THE ROCKETS’ OFFER TO JEREMY LIN!

Lupica continued, “What they didn’t care about was what Linsanity did to Cablevision stock, and what a big week he gave Jimmy Dolan in the stock market.

People paying more money than ever for Knicks tickets, as a way of helping fund the renovation of the Garden, usually don’t rejoice when they find out the owner of the team has made a huge score.

Fans, especially ones beaten down the way Knicks fans have been, just want to win. This isn’t about the Garden still being the “mecca” of basketball after the decade it has just seen; this is about the power of the sport in New York. You see it and really hear it around here when pro basketball comes to life the way it did this week, with the Nets trading for Joe Johnson and signing Deron Williams and touching off more speculation about Dwight Howard.

You even see it with the Knicks, all the stories about a couple of legendary point guards like Steve Nash and Jason Kidd, whose combined age is 77.”

It’s a strange twist by Lupica, who has long felt what is good for sports fans is good for the NY sports teams But in his column that will hit newsstands in the morning, Lupica explains:

“Nets fans want their team to matter again for the first time since Kidd was with them, and was young. Knicks fans want to believe their team can somehow get back to the top tier of teams in their conference, and not see streamers falling out of the rafters of the “mecca” of basketball because the Knicks have won their first playoff game in 11 years.

So now here they are with Lin.

They didn’t get LeBron and they still haven’t found a way to get Chris Paul. Nobody ever asked this question, as they were about to trade half their team for Carmelo: Hey, you think ’Mar’e and Melo can play together?

Donnie Walsh leaves and Glen Grunwald comes in and makes a big splash signing Tyson Chandler and Nash ends up in L.A. instead of here.

They sign Kidd, as if the mecca of basketball is now the mecca of mentoring. Now we wait to see what happens with Lin. And the question Knicks fans keep asking themselves, because I heard them asking it all week, is just how good they think Jeremy Lin is? Mike D’Antoni gave Lin the ball because he had no other choice at the time, and then Lin briefly flourished in D’Antoni’s system, even when Carmelo wasn’t around.”

And so, Lupica has come to a conclusion. And that conclusion is that Jeremy Lin, and all the LINsanity that goes along with him, should just go to Houston. Here’s how he wraps it up:

“If the Knicks bring Lin back, we find out if Mike Woodson will give No. 17 the ball happily and voluntarily and see if he can make the Knicks better in Woodson’s system, even though you mostly describe Woody’s system this way: Throw Melo the damn ball.

A Knicks fan I know, one who loves basketball, both Lin and Kidd, sent me the following email on Friday:

“You may think I’m crazy but Lin might be better off in Houston from a career perspective although he can stand to make more money in endorsements in NY. Imagine trying to deal with Carmelo and Woodson.

‘Iso’ ball is street ball and that’s not Lin’s game. Kidd will find this to be a problem, too. He knows that you can’t just pass the ball to one guy. If I were Lin I’d seriously consider going to Houston, as much as I would love to have him here.”

So would I. Everybody knows what it was like around here when Lin exploded the way he did and people wanted to watch the Knicks again, and not because of Amar’e Stoudemire and not because of Carmelo Anthony, because of a Harvard guy off the end of the bench who hadn’t been able to keep a job in the NBA.

You know what happened after that, how D’Antoni walked away and how things changed for Carmelo and the Knicks when Woodson moved up the bench. Then Lin got hurt, here we are.

Everybody expects the Knicks to match the Rockets’ offer. But you look at the whole thing sometimes, and not just from the team’s perspective, and ask yourself one last question about Jeremy Lin and the unselfish way he clearly likes to play basketball:

If the Harvard man could make his own decision about the business of basketball, not his own marketing, what does he think the smartest play is for him?

Where’s the best place for him to sell himself?”

So, is Mike Lupica right? Or is he the latest in a long line of reporters who just doesn’t understand Jeremy Lin’s potential as a franchise player for the New York Knicks? We’re HustleTweeting about this right now, and you’re more than welcome to join the conversation by following THE HEYMAN HUSTLE on Twitter HERE or write to us directly at hustleoncrave@gmail.com  Hey, have you checked out the Hustle’s Ultra High Quality You Tube Channel, with  exclusive videos featuring BROCK LESNAR’S “HERE COMES THE PAIN”  … ICE-T AND COCO’s SEX SECRETS … THE ULTIMATE WELTERWEIGHT BAD ASS NICK DIAZ … CONTROVERSIAL TEEN SENSATION TAYLOR MOMSEN … LEGENDARY MMA PIONEER FRANK SHAMROCK … THE WALKING RIOT MISSY HYATT … if you’re not subscribing, you’re missing something … and by the ways cheapos, it’s FREE! Yes, absolutely 100 percent FREE! What are you waiting for? Check it out HERE!