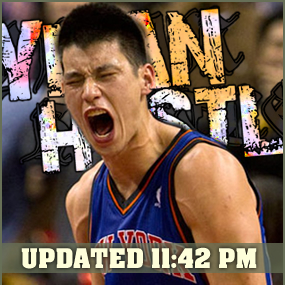 The Houston Rockets Have Made a Huge Investment, and The New York Knicks Have Moved Away From the LINsanity of it All!

The Houston Rockets Have Made a Huge Investment, and The New York Knicks Have Moved Away From the LINsanity of it All!

It’s official. Jeremy Lin is no longer a New York Knick. Sound the buzzer, LINsanity has left Madison Square Garden. The Knicks have decided to pass on the 23 year old point guard, who will now play for the Houston Rockets. Lin gets a three-year, 25.1 million dollar deal.

It was a deal the Knicks could have matched. The team elected not to do so.

The Knicks did not immediately announce their decision Tuesday night, but they conveyed their intentions to Lin sometime after 10 PM, according to a report in The New York Times, who cited their source as a person with knowledge of the conversation. By league rule, the Knicks had until 11:59 PM Eastern Time to match the offer or let Lin leave NY for Houston.
The final decision rested with Madison Square Garden Chairman of the Board James L. Dolan, but the source told the Times “It is done.”

The decision was said to be financial, not emotional. Lin’s contract contains a third-year balloon payment of $14.9 million, which would have cost the Knicks another $35 million or more in luxury-tax penalties. This so-called poison pill was devised by the Rockets to dissuade the Knicks from matching, and it proved effective.

Knicks officials ultimately concluded that it made more sense to pay two veteran point guards, Jason Kidd and Raymond Felton, a combined $7 million in 2014-15, than to spend $50 million or more to keep Lin, who has yet to play a full season as a starter.

So the Knicks’ most popular player in more than a decade, who rose from obscurity, saved their season and became a global sensation, is gone. He will join a rebuilding Rockets team that is pushing hard to land Dwight Howard, the Orlando Magic’s disgruntled star center, but has little established talent at the moment.

Lin spent just 26 games as the Knicks’ primary point guard last season, but it was a memorable, often spectacular run, filled with buzzer-beating shots, dazzling passes and bold drives to the rim. It began with a seven-game winning streak that electrified the Garden and spawned a household word: Linsanity.

Along the way, Lin outdueled Kobe Bryant in a victory over the Los Angeles Lakers and outshined Dirk Nowitzki to beat the Dallas Mavericks. His fame grew expenentially because of his unique profile: as a Harvard graduate and Taiwanese American who went undrafted and was waived twice before finding his niche with the Knicks.

A knee injury, and subsequent surgery, ended Lin’s magical run in late March. He averaged 18.5 points and 7.6 assists in that run — statistics that would place him among the N.B.A.’s top point guards if he sustained them for a full season. Yet Lin also had an above-average turnover rate, and he struggled against some of the league’s top defensive teams, notably the Miami Heat, who harassed him into 1-for-11 shooting and eight turnovers on Feb. 23.

Despite Lin’s great promise, his portrait remains incomplete. He is clearly better than the scouting reports suggested when he went undrafted out of Harvard in 2010. Still unknown is whether he will be a star, a flash in the pain or merely a very good point guard. He was brilliant in former Coach Mike D’Antoni’s offensive system, but it was unknown how he might fare in the more traditional offense of D’Antoni’s successor, Mike Woodson.

Whatever he may become, it will happen with the Rockets, who have placed a great deal of faith and money in Lin. Houston has stripped away most of its roster — including its two top point guards, Kyle Lowry and Goran Dragic — in an attempt to clear room for Howard. A pick-and-roll tandem of Lin and Howard could be devastating and entertaining.

The Knicks’ decision ends two weeks of suspense and speculation, which began when Lin became a restricted free agent on July 1. Now comes the inevitable backlash, from an embittered fan base that is suspicious of the Knicks’ motives and already disdainful of Dolan’s leadership.

Fans started at least two online petitions to keep Lin in recent days, after it became apparent the Knicks were leaning toward letting him go. As the news spread Tuesday, fans on Twitter lashed out at Dolan and Knicks management. Some renounced their loyalty to the team and said they would root for the Brooklyn-bound Nets.

Knicks officials had yet to comment on the Lin situation as of 10:30 p.m. All of the team’s top executives, including Dolan, General Manager Glen Grunwald and Woodson, were in Las Vegas for the N.B.A.’s summer league, which features rookies, free agents and other hopefuls.

Dolan sat next to Woodson for the Knicks’ afternoon game at U.N.L.V.’s Cox Pavilion, but he spent most of his time checking his mobile phone. Amar’e Stoudemire, the Knicks’ star forward, later joined them in the stands. After the game, Dolan and Grunwald huddled for a time while a team spokesman stood close by, keeping reporters at bay.

The Knicks wanted to keep Lin, but his situation was complicated. Because he was a restricted free agent, the Knicks had the right to match any offer. Yet under N.B.A. rules, they could offer him no more than $16.13 million in a three-year deal, and a maximum of $28.75 million over five years. Only a rival team was allowed to include the third-year balloon payment.

So it was up to Lin to set his own market value, by getting an outside offer. He initially agreed with Houston on a three-year, $19.5 million deal, including a $9.3 million balloon payment in the third year. That deal was agreed to in principle but never signed.

When it became apparent that the Knicks would match, the Rockets made a decision. Having already lost and having lost Lowry and Dragic, the Rockets decided to increase the third-year salary to $14.9 million. That $5 million bump would have cost the Knicks an extra $21.25 million, because they are already projected to be well over the tax line in the N.B.A.’s more punitive new system.

So the Knicks will head into next season with a point-guard platoon of Jason Kidd and Raymond Felton, both of whom have more experience than Lin but carry their own caveats. Kidd, a 10-time All-Star, is 39 years old and is no longer playing at an elite level. He averaged 6.2 points and 5.5 assists a game for Dallas, while shooting .363 from the field. Felton, 28, has been solid in seven N.B.A. seasons, but he is coming off the worst year of his career, averaging 11.4 points and 6.5 assists for Portland, while shooting .407 from the field. Felton was criticized for showing up out of shape and reportedly clashed with Coach Nate McMillan.

Some of Felton’s best moments came in his half-season with the Knicks, in 2010-11, when he formed an effective pick-and-roll partnership with Stoudemire in D’Antoni’s offense. The Knicks can only hope they recapture the chemistry under Woodson.

Of course, we’re HustleTweeting on the Jeremy Lin situation, and you’re more than welcome to join the conversation by following the Hustle on Twitter HERE or write to us directly at hustleoncrave@gmail.com  Hey, have you checked out the Hustle’s Ultra High Quality You Tube Channel, with  exclusive videos featuring BROCK LESNAR’S “HERE COMES THE PAIN”  … ICE-T AND COCO’s SEX SECRETS … THE ULTIMATE WELTERWEIGHT BAD ASS NICK DIAZ … CONTROVERSIAL TEEN SENSATION TAYLOR MOMSEN … LEGENDARY MMA PIONEER FRANK SHAMROCK … THE WALKING RIOT MISSY HYATT … if you’re not subscribing, you’re missing something … and by the ways cheapos, it’s FREE! Yes, absolutely 100 percent FREE! What are you waiting for? Check it out HERE!