Jim Ross: "Paul Heyman is The Meyer Lansky of The Brock Lesnar Mafia!" 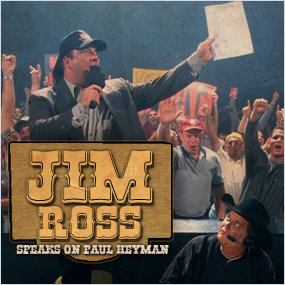 If you missed Jim Ross’ appearance with Sean Pendergast on Yahoo Sports Radio this weekend, well you missed what can only be described as a Slobberknocker!

J.R., who was already considered the best play-by-play announcer in pro wrestling / sports entertainment when he was first paired with our own Hustler De Tuti Hustlers Paul Heyman as an announce team in WCW, an then was paired up again with Paul on WWE Monday Night Raw in 2001, gave some amazing insight as to Paul’s return to WWE television and the Brock Lesnar / Paul Heyman dynamic on and off camera.

Some of J.R.’s contributions to the Yahoo broadcast —

“The Paul Heyman on-camera television personality is a giant skid mark on the underwear of life!”

“A lotta people (say) WrestleMania X-Seven (which I commented with Heyman) was the best show I’ve ever broadcast.”

“Lesnar is basically anti-social, a guy (who doesn’t like people), and Heyman is on the verge of not even being human.”

“They are as close as Lesnar will ever get to him who’s not in his family. (Brock is) all-business. and he knows that Heyman knows the business, so that’s his confidant. (Heyman is) his go-to guy.
And there’s no one else. No one else in the business that Lesnar leans on for guidance or feedback.”

“Heyman is the Meyer Lansky of the Brock Lesnar Mafia!”

It’s a fascinating listen, and gets our highest recommendation. You can check out Jim Ross on Twitter HERE, and check out his website HERE

Of course, we’re HustleTweeting about Jim Ross’ appearance on Yahoo Sports Radio, and you’re more than welcome to join the conversation by following the Hustle on Twitter HERE or write to us directly at hustleoncrave@gmail.com  Hey, have you checked out the Hustle’s Ultra High Quality You Tube Channel, with  exclusive videos featuring BROCK LESNAR’S “HERE COMES THE PAIN”  … ICE-T AND COCO’s SEX SECRETS … THE ULTIMATE WELTERWEIGHT BAD ASS NICK DIAZ … CONTROVERSIAL TEEN SENSATION TAYLOR MOMSEN … LEGENDARY MMA PIONEER FRANK SHAMROCK … THE WALKING RIOT MISSY HYATT … if you’re not subscribing, you’re missing something … and by the ways cheapos, it’s FREE! Yes, absolutely 100 percent FREE! What are you waiting for? Check it out HERE! 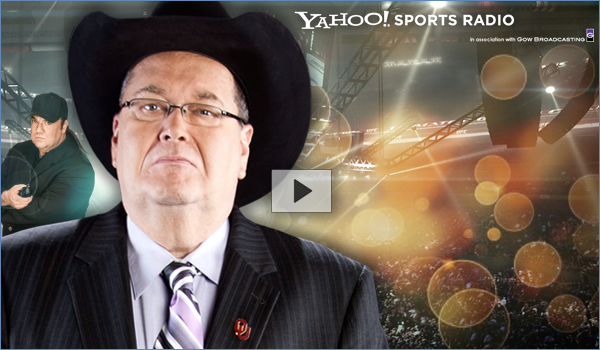