John Cena Throws Out The 1st Pitch At Dodger Stadium 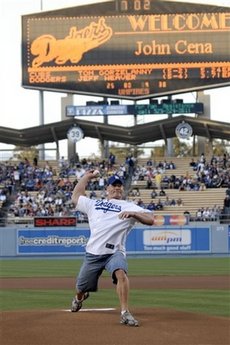 WWE’s Hollywood Blitz continued as John Cena threw out the ceremonial 1st pitch at Dodgers Stadium as The Los Angeles Dodgers took on the Chicago Cubs on Thursday, August 20th.

Cena is scheduled to face Randy Orton for the WWE Championship at SummerSlam, which takes place at the Staples Center in LA this weekend.