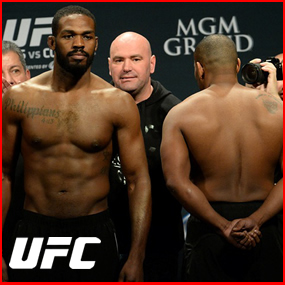 Daniel Cormier can’t wait to be locked into the Octagon with UFC Light Heavyweight Champion Jon Jones. The two have brawled during a media appearance; exchanged profanity-filled threats when they didn’t realize the satellite feed was live; and have had multiple run-ins that have required them to be separated.

At the UFC 182 weigh-ins, Cormier kept his hands behind his back and simply refused the photo op with the 27 year old who many consider to be the best pound-for-pound fighter in UFC today … and perhaps ever.
Jones, by the way, is not impressed.

“I can’t say I hate (Daniel Cormier),” the reigning defending Light Heavyweight Champion stated. “Hate is a really powerful word. I definitely have a strong dislike for the guy.”

Jones makes no bones (no pun intended) as to how he envisions this fight going down. “A quick finish would be awesome,” Jones half-laughed. “To just shut him up right away and to prove to everyone how much better of a fighter I am than he is.”

Jones questions the 36 year old’s conditioning, just for starts. “I just don’t see physically how he has been training as much as I’ve been training and just can go as long as I can go,” Jones matter-of-factly stated. “I don’t see how his body can keep up in the training or the actual fight and I’m going to prove that theory.”

As much as Jones wants the quick finish, he has a feeling he’s in for a long fight in Las Vegas. “I believe there will come a point in the fight where I come to mesmerize him and really confuse him and just start picking him apart,”  Jones predicted.. “I think I’ll win the fight by decision. I think that’s what the people want to see, a five round beat down of DC, and that’s what I prepared to give them.”

So Jon Jones is not predicting a finish? He’s predicting the fight goes all five rounds? That’s a most interesting statement, one that we’re HustleTweeting about at this very moment. Please feel free to join the conversation by following the Hustle on Twitter HERE or write to us directly at hustleoncrave@gmail.com Hey, have you checked out the Hustle’s Ultra High Quality You Tube Channel, with exclusive videos featuring OUR WORLD EXCLUSIVE WITH MIKE TYSON … BROCK LESNAR’S “HERE COMES THE PAIN” … ICE-T AND COCO’s SEX SECRETS … MMA BAD BOY NICK DIAZ … the list goes on and on, so if you’re not subscribing, you’re missing something … and by the ways cheapos, it’s FREE! Yes, absolutely 100 percent FREE! What are you waiting for? Check it out HERE!