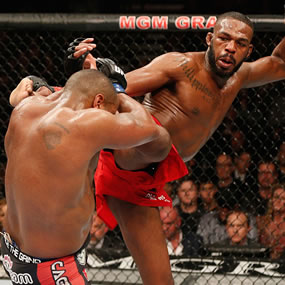 Jones Stuffs Almost Every Takedown Attempt By The Olympian, Takes Him Down Multiple Times, and Simply Throws Cormier a Beating! 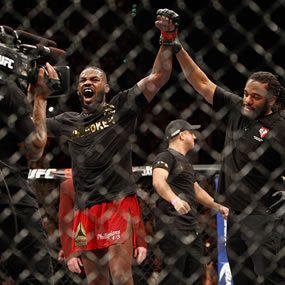 Jones Stuffs Almost Every Takedown Attempt By The Olympian, Takes Him Down Multiple Times, and Simply Throws Cormier a Beating!

Jon Jones took a huge step toward the recognition of being the greatest UFC fighter of all time with a stunningly dominant victory over Daniel Cormier at the MGM Grand Garden Arena in the main event of UFC 182 tonight. All three judges saw the fight the same way, with Jones decisively winning rounds 1, 3, 4 and 5. Cormier’s round was round 2, but even in that round Jones was demonstrating greatness throughout.

With pay per view time running out, Joe Rogan entered the Octagon and rushed an interview with Jones. The champion had no love for Cormier.

Noting that he was wearing an “Unbroken” t-shirt, Jones was not shy shouting down the haters. “For everybody who bought a ‘Break Bones’ t-shirt, take it back, you wasted your money!”
“It felt great … he’s only human!” Jones continued. “The undefeated DC. All the haters. All the crap he talked, it motivated me. Five takedowns to zero. I’m sorry for not being classy, but I do not like DC, which is why I’m being this way.”

It was not only amazing to watch Jones dominate, but equally impressive to watch him defend against Cormier’s formidable offense. Of course, we’re HustleTweeting right now, this moment, about Jon Jones vs Daniel Cormier, and you’re more than welcome to join the conversation by following the Hustle on Twitter HERE or write to us directly at hustleoncrave@gmail.com Hey, have you checked out the Hustle’s Ultra High Quality You Tube Channel, with exclusive videos featuring OUR WORLD EXCLUSIVE WITH MIKE TYSON … BROCK LESNAR’S “HERE COMES THE PAIN” … ICE-T AND COCO’s SEX SECRETS … MMA BAD BOY NICK DIAZ … the list goes on and on, so if you’re not subscribing, you’re missing something … and by the ways cheapos, it’s FREE! Yes, absolutely 100 percent FREE! What are you waiting for? Check it out HERE!