Jon Jones Is Wanted For Questioning, Which Is Why Mike Tyson's Appearance on THE HEYMAN HUSTLE is So Powerful To Watch Right Now 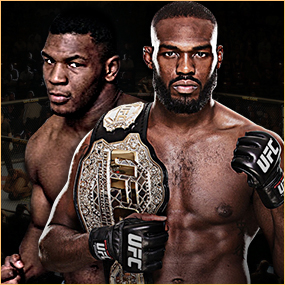 Jon “Bones” Jones, the most dominant Light Heavyweight Champion in UFC history is wanted by the Albuquerque Police Department for questioning in a hit-and-run case involving a pregnant woman, according to multiple sources. Several news reports state the woman whose car was hit Sunday morning is in her 20s and pregnant, the Albuquerque PD stated in a press release this evening. The woman was taken to the hospital with minor injuries. Jones, labeled a “person of interest” earlier this evening is now being officially called “a suspect.”  Jones is scheduled to defend his title against Anthony “Rumble” Johnson at UFC 187 on May 23 in Las Vegas.

UFC released a statement this evening, stating  “We are aware that the Albuquerque Police Department is interested in speaking to Jon Jones regarding his possible involvement in a motor vehicle accident. We are in the process of gathering facts and will reserve further comment until more information is available.”

When Jones ran into trouble a few years ago, our very own Hustler De Tuti Hustlers Paul Heyman interviewed Mike Tyson on THE HEYMAN HUSTLE regarding Jones’ troubles. Never before have Tyson’s comment been so prophetic.

Of course, we’re HustleTweeting about Mike Tyson’s Advice To Jon Jones, and you’re more than welcome to join the conversation by following The Heyman Hustle on Twitter HERE! You can also post your thoughts on our Facebook page HERE!  If you feel compelled to write us, please do so at HustleOnCrave (at) Gmail.com