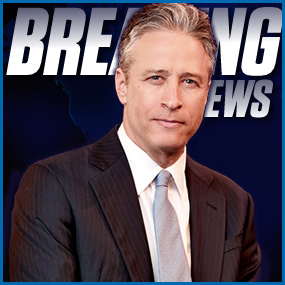 Jon Stewart just announced, moments ago, he was going to leave The Daily Show by the end of the year. The comedian has hosted the satirical news show since 1999, and while the announcement has been expected for quite some time, the audience was still in shock when Stewart lowered the boom. We are posting this story while the taping of tonight’s show is still in progress, so obviously many more details to come as this story unfolds. Comedy Central was not caught off guard, as they released a statement a few moments after Stewart told the audience the news:

‘For the better part of the last two decades, we have had the incredible honor and privilege of working with Jon Stewart. His comedic brilliance is second to none. Jon has been at the heart of Comedy Central, championing and nurturing the best talent in the industry, in front of and behind the camera. Though his unique voice and vision, ‘The Daily Show’ has become a cultural touchstone for millions of fans and an unparalleled  platform for political comedy that will endure for years to come. Jon will remain at the helm of ‘The Daily Show until’ later this year. He is a comic genius, generous with his time and talent, and will always be a part of the Comedy Central family.’

A date for Stewart’s exit was not specified.

His departure is a second big blow for Comedy Central. Another star, Stephen Colbert, left “The Colbert Report” last year to take over for CBS’ “Late Show” host David Letterman when he retires in May.

Stewart, 52, took a several months-long hiatus in 2013 to direct “Rosewater,” a film about an Iranian-born journalist who was imprisoned for 118 days in Tehran and accused of being a spy.

The Comedy Central statement did not indicate what Stewart’s plans were after leaving.

Just had the honor of being the great Jon Stewart’s guest on @TheDailyShow, where he announced he’s leaving. Emotional night. #jonstewart

Of course, we’re HustleTweeting about Jon Stewart, and you’re more than welcome to join the conversation by following the Hustle on Twitter HERE or write to us directly at hustleoncrave@gmail.com Hey, have you checked out the Hustle’s Ultra High Quality You Tube Channel, with exclusive videos featuring OUR WORLD EXCLUSIVE WITH MIKE TYSON … BROCK LESNAR’S “HERE COMES THE PAIN” … ICE-T AND COCO’s SEX SECRETS … MMA BAD BOY NICK DIAZ … the list goes on and on, so if you’re not subscribing, you’re missing something … and by the ways cheapos, it’s FREE! Yes, absolutely 100 percent FREE! What are you waiting for? Check it out HERE!