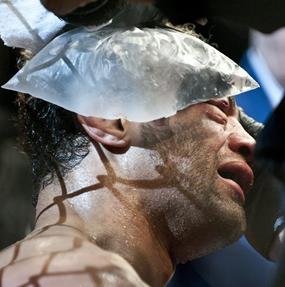 As He Awaits Christmas Week Surgery on His Broken Orbital Bone, Koscheck is Criticized By His Trainer Javier Mendez!

After being prohibited from flying due to his eye injury, Koscheck was driven to Boston by coach "Crazy" Bob Cook, only to be told air pockets had developed and he’d have to wait a week for the surgery (CLICK HERE for graphic photos and details on the eye injury).

Now, Koscheck is being criticized by noted trainer Javier Mendez, one of the head trainers at the American Kickboxing Academy, who trains not only Koscheck but also Undisputed UFC Heavyweight Champion CAIN VELASQUEZ.

"Josh fought crappy," Mendez bluntly stated about Koscheck’s performance against GSP at UFC 124 in Montreal,  "He knows it. If we told him he fought great, we’d be lying. He didn’t do anything what he was supposed to do, and at the same time, Georges did. Josh is similar to what I was like. I never did what my coaches wanted to do.  I did what I wanted to do. Some people like to guide themselves, and others like people guiding them. Let’s not discount the fact that GSP is a great fighter."

We’re HustleTweeting about Javier Mendez’s brutally frank comments, and you’re more than welcome to join the conversation! Follow Th Hustle on Twitter HERE or write to us at hustleoncrave@gmail.com