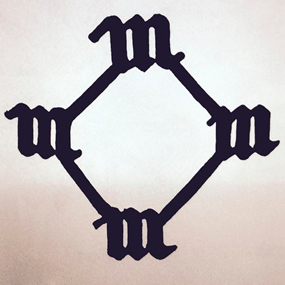 Kanye West took a page out of wife Kim Kardashian‘s playbook and broke the Internet this weekend, revealing the name of his upcoming seventh album, “So Help Me God” and sharing what many believe to be the project’s cover art. ‘Ye made the major announcement on Twitter.

“My last album was a protest in music,” was Kanye’s comment on Febuary 20 during a radio interview with New York City’s Power 105.1 FM Breakfast Club. “I was like, ‘I’m gonna take my ball and go home. If ya’ll aint going (to) let me play where I wanna play and do clothes and do this … the album (‘Yeezus’) don’t really got no music I just let ya’ll have a little music on it … ‘Bound,’ but that was it.”

Kanye has already released three songs from the upcoming project (“Only One” …  “FourFiveSeconds” ..  and “All Day”) by either performing it live as he did with the Rihanna and Paul McCartney collaboration, or in the form of an official release. Of course, we’re HustleTweeting about Kanye West, and you’re more than welcome to

join the conversation by following the Hustle on Twitter HERE or write to us directly at hustleoncrave@gmail.com Hey, have you checked out the Hustle’s Ultra High Quality You Tube Channel, with exclusive videos featuring OUR WORLD EXCLUSIVE WITH MIKE TYSON … BROCK LESNAR’S “HERE COMES THE PAIN” … ICE-T AND COCO’s SEX SECRETS … MMA BAD BOY NICK DIAZ … the list goes on and on, so if you’re not subscribing, you’re missing something … and by the ways cheapos, it’s FREE! Yes, absolutely 100 percent FREE! What are you waiting for? Check it out HERE!

So Help Me God pic.twitter.com/e3UUsQQEts