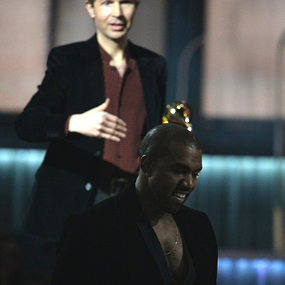 According to Kanye West, he was deadly serious when he nearly crashed the stage … AGAIN!

Well, it happened again. Sort of.

Kanye West nearly crashed the stage ahead of Beck’s speech for winning Album of the Year. It was quite reminiscent of when Kanye interrupted Taylor Swift‘s 2009 VMA Award moment, but right before he did it again, he either stopped himself, or let everyone think it was a joke.

But according to Kanye, it was no joke.

While everyone got a good laugh about it, Kanye was in epic-rant-mode. On the post-Grammy show on E! Kanye said he wasn’t kidding. Standing next to his wife Kim Kardashian (a powerhouse on E!) Kanye said he believed Beyonce should have won in the category … the same thing that set him off back in 2009! “I just know that the Grammys, if they want real artists, to keep coming back, they need to stop playing with us. We ain’t gonna play with them no more,” he said, upset that Beck beat Beyonce in the category. “And Beck needs to respect artistry and he should’ve given his award to Beyonce.”

Kanye also said he and other artists were “tired” of being disrespected by the Grammys.

Pontificated Mr. West, “Because when you keep on diminishing art and not respecting the craft and smacking people in their face after they deliver monumental feats of music, you’re disrespectful to inspiration! And we as musicians have to inspire people who go to work every day, and they listen to that Beyonce album and they feel like it takes them to another place.”

Kanye said the reason he decided not to crash the stage was out of consideration for his daughter, North, and his wife, Kim Kardashian.

“I’m not gonna do nothing to put my daughter at risk, but I am here to fight for creativity,” he said. “That’s the reason why I didn’t say anything tonight, but you all know what it meant when ‘Ye walked out on that stage!”

OK. It gets better! Kanye also took issue with E!’s microphones, which displayed the network’s logo.

“Who designed these mics that you see? I took the E! off my mic. Okay we know, it’s gonna be E! already! It’s gonna be E! at the bottom of the screen right here,” he said, pointing into the camera. “We need to step up the taste level across the board on all networks. So you can see these outfits!”

He then had the after-party special co-hosts Terrence Jenkins, Khloe Kardashian, Christina Milian and Zanna Roberts Rossi remove the E! logo from their mic. When Jenkins briefly protested, West told him, “They need you! Y’all are the personalities, E! needs y’all! The Kardashians have a percentage of E! That’s what I’m saying, they need y’all!” West was then asked to breakdown the designers of his outfit, which he did much more lightheartedly, and Kim Kardashian recounted how he picked out her outfit of the night.

Before he and Kim left to catch a flight to New York, he said, “Don’t let them put that E! back on though!”

Just for the record, they did anyway, and Khloe Kardashian told the panel that she responded to a text from Kanye and sister Kim that they did so against their wishes.

Of course, we’re having a blast HustleTweeting about Kanye West, and you’re more than welcome to join the conversation by following the Hustle on Twitter HERE or write to us directly at hustleoncrave@gmail.com Hey, have you checked out the Hustle’s Ultra High Quality You Tube Channel, with exclusive videos featuring OUR WORLD EXCLUSIVE WITH MIKE TYSON … BROCK LESNAR’S “HERE COMES THE PAIN” … ICE-T AND COCO’s SEX SECRETS … MMA BAD BOY NICK DIAZ … the list goes on and on, so if you’re not subscribing, you’re missing something … and by the ways cheapos, it’s FREE! Yes, absolutely 100 percent FREE! What are you waiting for? Check it out HERE!