Keith Olbermann is No Longer "Current" 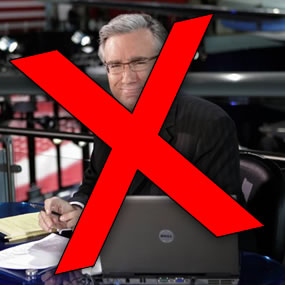 Earlier today, just hours before airtime, the network announced “Countdown,” which moved to Current from MSNBC in June of last year, was being replaced with the new program immediately.

“Welcome to Current’s new 8 p.m. (Eastern Time) show, Viewpoint,” said Spitzer, who had a short-lived talk show on CNN in that same time slot, where he briefly went up against Olbermann. There was not one mention of Olbermann on the broadcast tonight.

Olbermann came to Current last year as the centerpiece of its new prime-time initiative after a wild and controversial eight-year run at MSNB (his second at that network), which was followed by his abrupt departure in January 2011.

Current wasted no time, and announced his hiring. It was a huge deal, reportedly a five-year, $50-million contract. This was to be the start of an extraordinary effort to transform Current’s prime time slate into progressive talk. Olbermann’s official title was Chief News Officer, and he was charged with providing editorial guidance for all of the network’s political news, commentary and current events programming.

Current TV founders Al Gore and Joel Hyatt said in a statement the network was “founded on the values of respect, openness, collegiality, and loyalty to our viewers. Unfortunately these values are no longer reflected in our relationship with Keith Olbermann and we have ended it.”

Olbermann reportedly clashed with his employers often. During the primary season he reportedly declined to host certain hours of election coverage and has missed a number of regular broadcasts, as well as complaining about technical problems he said undermined his show.

“We are confident that our viewers will be able to count on Gov. Spitzer to deliver critical information on a daily basis,” Gore and Hyatt said in their Open Letter To Viewers.

In a statement posted online, Olbermann countered that “the claims against me implied in Current’s statement are untrue and will be proved so in the legal actions I will be filing against them presently.”

He said he had been attempting “for more than a year” to resolve his differences with Gore and Hyatt internally, “while I’ve not been publicizing my complaints.”

Instead of “investing in a quality news program,” he said, his bosses “thought it was more economical to try to get out of my contract.”

He called his decision to join Current “a sincere and well-intentioned gesture on my part, but in retrospect a foolish one.”

Of course, we’re HustleTweeting about Keith Olbermann and Current TV, and you’re more than welcome to join the conversation by following THE HEYMAN HUSTLE on Twitter HERE or write to us directly at hustleoncrave@gmail.com  Hey, have you checked out the Hustle’s Ultra High Quality You Tube Channel, with  exclusive videos featuring BROCK LESNAR’S “HERE COMES THE PAIN”  … ICE-T AND COCO’s SEX SECRETS … THE ULTIMATE WELTERWEIGHT BAD ASS NICK DIAZ … CONTROVERSIAL TEEN SENSATION TAYLOR MOMSEN … LEGENDARY MMA PIONEER FRANK SHAMROCK … THE WALKING RIOT MISSY HYATT … if you’re not subscribing, you’re missing something … and by the ways cheapos, it’s FREE! Yes, absolutely 100 percent FREE! What are you waiting for? Check it out HERE!