Keith Richards Smokes a Joint In The Morning, Has a Documentary Premiering on Netflix and Is Releasing a New Album 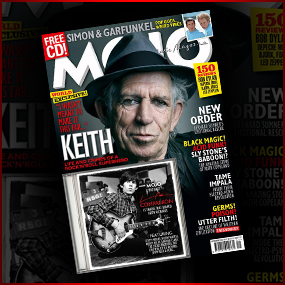 It’s a busy month for The Rolling Stones’ guitarist!

Keith Richards is on the cover of Mojo Magazine, and surprise surprise the legendary guitarist likes to smoke a joint in the morning. Yup, the 71 year old rock n roller likes to wake ‘n’ bake every day. Keith, who is promoting his upcoming album “Crosseyed Heart” gave a great interview to Mojo Magazine in which he states  “I smoke regularly, an early morning joint. Strictly Californian  … One of the most pleasant things to watch is a map of America where it goes, green… green… green. Whether it’s a good thing in the long run, I don’t know.”

So he’s wakin’ and bakin’, and he’s giving interviews, and he’s releasing an album … what else? Well, a new documentary, “Keith Richards: Under the Influence” will debut on Netflix on September 18th. Filmmaker Morgan Neville, who recently won a “Best Documentary” Oscar for a documentary about backup singers called “20 Feet From Stardom” and who directed Richards’ recent “Trouble” music video directed the film.

Producers are promising an “unprecedented look” at Richards’ influences, songwriting process and guitar playing in the documentary. The film, which was made as Richards prepared his first solo record in over two decades, “Crosseyed Heart” which not-so-coincidentally is due out the same day as the movie, culls from interviews, archival material and footage of him recording new music.

“If there’s a Mount Rushmore of Rock & Roll, Keith’s face is surely on it,” Neville said in a statement. “He has always represented the soul of rock music  … for all of the light and dark shades that implies. To my relief, Keith Richards turned out to be a real man  … full of humor, knowledge and wisdom. That’s the real Keith we’ve worked to capture in our film and I’m honored to bring it to ​a global audience via Netflix.”

Of course, we’re HustleTweeting about Keith Richards, and you’re more than welcome to join the conversation by following the Hustle on Twitter HERE or write to us directly at hustleoncrave@gmail.com Hey, have you checked out the Hustle’s Ultra High Quality You Tube Channel, with exclusive videos featuring the #HUSTLEBOOTYTEMPTATS SUPERMODEL OF THE YEAR … OUR WORLD EXCLUSIVE WITH MIKE TYSON … BROCK LESNAR’S “HERE COMES THE PAIN” … ICE-T AND COCO’s SEX SECRETS … MMA BAD BOY NICK DIAZ … the list goes on and on, so if you’re not subscribing, you’re missing something … and by the ways cheapos, it’s FREE! Yes, absolutely 100 percent FREE! What are you waiting for? Check it out HERE