Kelly Brook Soaks Up The Attention at The Cannes Film Festival 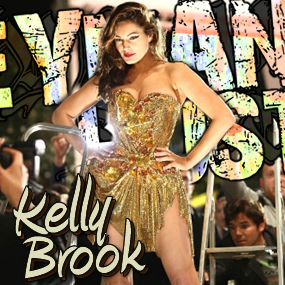 Whether it’s showing up at Kanye West’s yacht party or simply posing in a phone booth wearing hot lingerie, UK super model Kelly Brook has been the highlight of this year’s Cannes Film Festival, at least to the celebrity-photo-op-starved paparazzi. The curvy bombshell, 32 years old, is at Cannes to theoretically promote her upcoming film co-starring English comedian Leigh Fracis in character as Keith Lemon. The film is aptly titled, “Keith Lemon: The Film.” Kelly’s multiple appearances in front of the cameras at Cannes has gotten so crazy, a noted French millionaire publicly offered her one million euro to spend the night with him. The millionaire, who is known as Frederic, reportedly interrupted Brook during a Cannes photocall to offer her the money.

The European tabloids have reported Kelly said no.

At least in public.

Hey, we’re HustleTweeting about Kelly Brook and her Cannes Film Festival awesomeness, and you’re more than welcome to join the conversation by following the Hustle on Twitter HERE or write to us directly at hustleoncrave@gmail.com  Hey, have you checked out the Hustle’s Ultra High Quality You Tube Channel, with  exclusive videos featuring BROCK LESNAR’S “HERE COMES THE PAIN”  … ICE-T AND COCO’s SEX SECRETS … THE ULTIMATE WELTERWEIGHT BAD ASS NICK DIAZ … CONTROVERSIAL TEEN SENSATION TAYLOR MOMSEN … LEGENDARY MMA PIONEER FRANK SHAMROCK … THE WALKING RIOT MISSY HYATT … if you’re not subscribing, you’re missing something … and by the ways cheapos, it’s FREE! Yes, absolutely 100 percent FREE! What are you waiting for? Check it out HERE!

CLICK ON THE PICS BELOW TO SEE THE ENTIRE PHOTO GALLERY OF
SIZZLING HOT UK SENSATION KELLY BROOK AT THE CANNES FILM FESTIVAL!