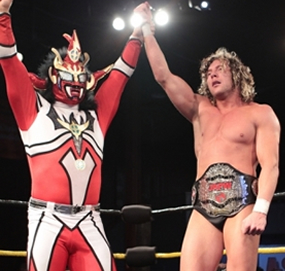 Kenny Omega has been on quite a roll recently, as the Canadian-born 28 year old sensation sent shockwaves around the world during New Japan Pro Wrestling’s Northeast USA Tour by defeating the legendary Jushin “Thunder” Liger for the Jersey All Pro Wrestling Light Heavyweight Championship at the old ECW Arena in South Philly, scoring the historic upset in 10:42 with the Croyt’s Wrath.

Liger had been champion since December 10, 2010, when he defeated Azireal to be crowned the champion. Of course, we’re HustleTweeting about Omega’s historic victory, and you’re more than welcome to join the conversation by following the Hustle on Twitter HERE or by hitting LIKE on our hyper-interactive Facebook page HERE!