Kevin Durant To Sign with the Golden State Warriors 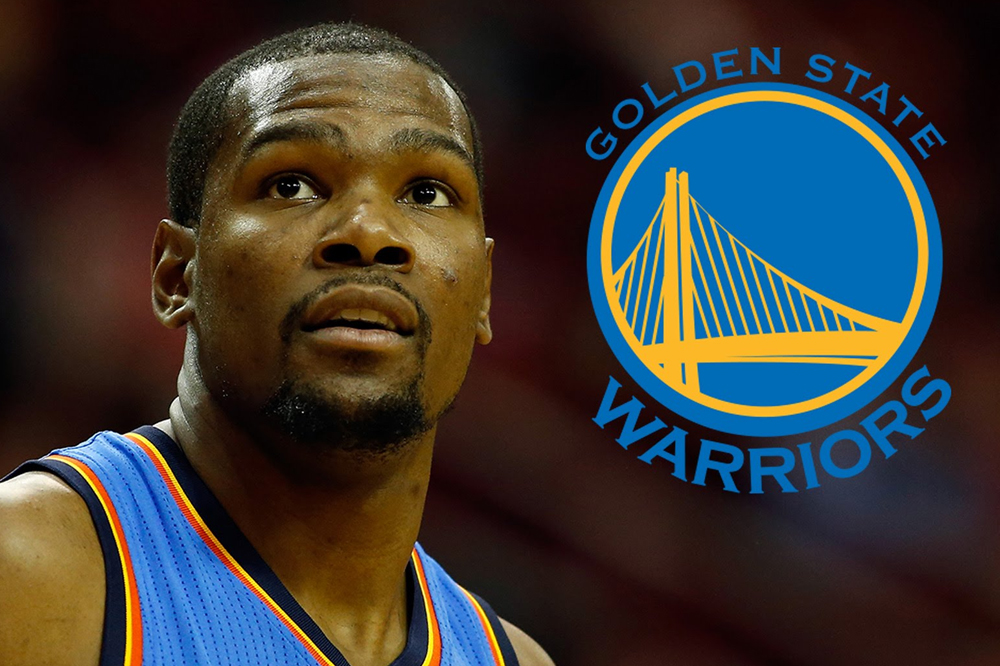 Kevin Durant has agreed to a two-year, $54 million deal with the Golden State Warriors. Durant leaves behind the Oklahoma City Thunder. Golden State, Boston, Miami, San Antonio and the Los Angeles Clippers met with Durant and his inner circle on Friday, Saturday and Sunday in the Hamptons on Long Island in New York.

“Kevin made an indelible mark on the Thunder organization and the state of Oklahoma as a founding father of the franchise,” Thunder executive vice president and general manager Sam Presti said in a statement. “We can’t adequately articulate what he meant to the foundation of this franchise and our success. While clearly disappointing that he has chosen to move on, the core values he helped us establish only lead us to thanking him for the many tangible and intangible ways that he helped our program.”

Durant made his announcement on the Players Tribune, for which he is deputy publisher, in a story simply entitled “My Next Chapter.”

The primary mandate I had for myself in making this decision was to have it based on the potential for my growth as a player — as that has always steered me in the right direction. But I am also at a point in my life where it is of equal importance to find an opportunity that encourages my evolution as a man: moving out of my comfort zone to a new city and community which offers the greatest potential for my contribution and personal growth. With this in mind, I have decided that I am going to join the Golden State Warriors.

I’m from Washington, D.C. originally, but Oklahoma City truly raised me. It taught me so much about family as well as what it means to be a man. There are no words to express what the organization and the community mean to me, and what they will represent in my life and in my heart forever. The memories and friendships are something that go far beyond the game. Those invaluable relationships are what made this deliberation so challenging.

It really pains me to know that I will disappoint so many people with this choice, but I believe I am doing what I feel is the right thing at this point in my life and my playing career.

Durant was considered the top free agent on the market and now joins a team that is coming off back-to-back NBA Finals, a championship in 2015 and a 73-win regular season. Durant, the No. 2 overall pick in the 2007 draft, averaged 28.2 points, 8.2 rebounds and five assists this past season. He led the Thunder to the NBA Finals in 2012 and was the league’s MVP in 2014.

Durant, 27, will join forces with All-Stars Stephen Curry, Klay Thompson and Draymond Green to form perhaps the most dangerous offense in the league.

The Warriors came back from a 3-1 deficit to defeat the Thunder in seven games in the Western Conference finals, then fell to the Cleveland Cavaliers in the NBA Finals after leading 3-1.

Our HustleTweeters are all over this story, and you’re more than welcome to join the conversation on the Hustle Twitter HERE or on our hyper-interactive Facebook page HERE!