The Weinstein Co. Is Out For Blood with "Killing Them Softly" 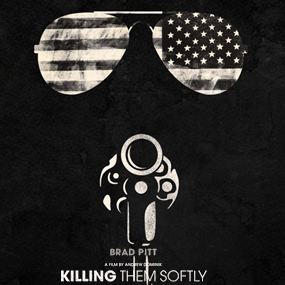 Brad Pitt Has Ice Running Through His Veins as Jackie Cogan … and If You Like Tony Soprano, You’re Gonna Love This Movie!

The film also stars Ray Liotta from “Goodfellas” and James Gandolfini … yes, Tony Soprano himself … as New York Mickey, a cold blooded hitman. Richard Jenkins, who is always excellent, is in it, too, and so are Scott McNairy from Monsters and  Ben Mendelsohn from The Dark Knight Rises.  !

“Killing Them Softly” is based on George V. Higgins’ crime novel “Cogan’s Trade” and follows Brad Pitt’s character Jackie Cogan, who is an enforcer investigating a heist that takes place during a high stakes poker game perpetrated by two junkies played by McNairy and Mendelsohn. Andrew Dominik (you may know some of his other work like Chopper or Assassination of Jesse James) both writes & directs the film which also features Casey Affleck and  Sam Rockwell. The film first premiered at the Cannes Film Festival and it hits theatres on October 19th.

Of course, we’re HustleTweeting about Brad Pitt, James Gandolfini, “Killing Them Softly” and anything else you can think of, so please feel free to join the conversation by following THE HEYMAN HUSTLE on Twitter HERE or write to us directly at hustleoncrave@gmail.com  Hey, have you checked out the Hustle’s Ultra High Quality You Tube Channel, with exclusive videos featuring OUR WORLD EXCLUSIVE WITH MIKE TYSON … BROCK LESNAR’S “HERE COMES THE PAIN” … ICE-T AND COCO’s SEX SECRETS … TEEN SENSATION TAYLOR MOMSEN … UFC BAD BOY NICK DIAZ … THE WALKING RIOT MISSY HYATT if you’re not subscribing, you’re missing something … and by the ways cheapos, it’s FREE! Yes, absolutely 100 percent FREE! What are you waiting for? Check it out HERE!

CHECK OUT THE OFFICIAL TRAILER FOR “KILLING THEM SOFTLY” 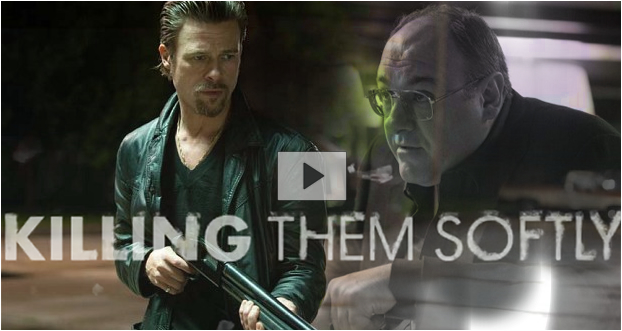