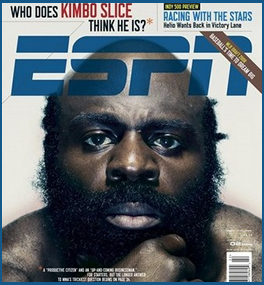 In a move that probably has Strikeforce’s Scott Coker and CBS/Showtime licking their lips, UFC President Dana White has confirmed UFC is releasing Kimbo Slice from his Ultimate Fighting Championships contract after the YouTube sensation was defeated by former New York Giants lineman Matt Mitrione at UFC 113 in Montreal.

At the press conference following the event, White stated, "That’s probably Kimbo’s last fight in the UFC. I got nothing but respect for him."

In an excellent interview conducted by AOL FanHouse reporter ARIEL HELWANI, White explained, "Kimbo took me up on the challenge … He could’ve done a lot of freakshow fights, done a lot of different  things … (Kimbo) stepped up to the plate, he took the challenge,  came on The Ultimate Fighter and I’m happy to have met Kimbo Slice. He’s not who I thought he was.  He’s a good guy, he came in, he worked hard. He’s done everything he could to evolve as a mixed martial artist and he won (the fight against Houston Alexander).  And he lost tonight … Kimbo Slice is no different than any of the other guys who don’t make the cut and end up getting cut from the UFC. He’s impressed me as a human being and as a fighter, and I like him and the guys who represent him very much."

White continued, saying "It’s not about being a huge draw. It’s about having the right to be here. Because whether you’re a big draw or not, this is about the sport and about who’s the best …  there’s other people out there who deserve to be in the UFC."

CLICK ON THE PHOTOS BELOW TO SEE THE ENTIRE
GALLERY OF KIMBO SLICE VS MATT MITRIONE FROM UFC 113!

IT’S A BRAND NEW WEEK, AND A BRAND NEW EDITION OF THE
HOLLYWOOD CHARLIE MEDIA WATCH. THE HEYMAN HUSTLE IS
PROUD TO PRESENT THE 15 HOTTEST STORIES FROM THE WEB
AVAILABLE AT YOUR GRUBBY LITTLE FINGERTIPS RIGHT NOW
FOR YOUR REVIEW. IT’S ALL HERE! JUST PICK A PIC AND CLICK!