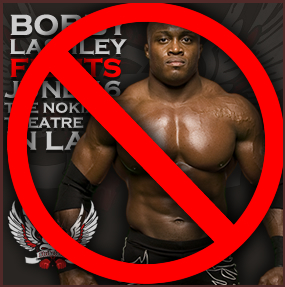 Bobby Lashley’s June 16th fight for Strikeforce at the Nokia Theatre in Los Angeles has been called off, as the former WWE superstar injured his knee in training. Lashley, who is 33 years old, has a 5-0 MMA record, and was scheduled to fight Ron Sparks, who also boasts a 5-0 record.

Strikeforce immediately announced an additional fight as part of the Nokia event, which is tied into the huge E3 video game convention that week in Los Angeles, as American Military Hero Tim Kennedy and Trevor Prangley will collide in a three round Middleweight bout.

Our own Hustler De Tuti Hustlers Paul Heyman has spoken at length with Lashley, and will be posting an update on Lashley’s condition.