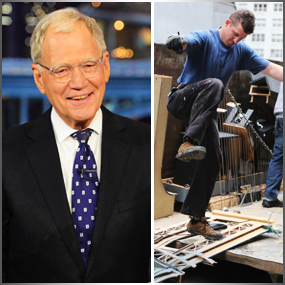 Less than a day after the final episode of The Late Show with David Letterman, CBS has trashed it’s remains.

According to a report in the New York Post, CBS has officially kicked the set to the curb. Fans of the long-running late night talk show gathered outside of Ed Sullivan Theater on Thursday to watch the set unceremoniously be sawed, crushed and broken to bits, less than a day after it’s final episode.

“I can’t believe they’re just demolishing the whole thing. It’s shocking,” said Stephanie Strausz, of Manhattan, who had a second-row ticket to Wednesday’s finale. “It should go in the Smithsonian, not the dumpster,” she said.

Of course, we’re HustleTweeting about David Letterman, and you’re more than welcome join the conversation by following The Heyman Hustle on Twitter HERE! You can also post your thoughts on our Facebook page HERE!  If you feel compelled to write us, please do so at HustleOnCrave (at) Gmail.com