LeBron James Puts On A Show at the NBA Finals 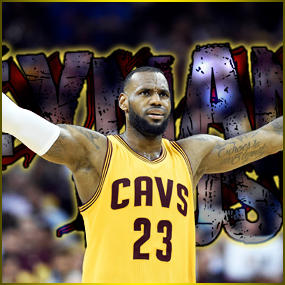 King James racks up some stats that are simply mind-boggling!

Not since Wilt Chamberlin has a single player been such a game changer. Not since Michael Jordan has anyone been so obviously the best player on the court, bar none. LeBron James led the Cleveland Cavaliers to a victory last night, but the real story is the dominance displayed by the hometown hero at the Quicken Loans Arena. As LeBron brings the Cavaliers to within two wins of their first-ever NBA championship,he  finished with 40 points, 12 rebounds and 8 assists. He has now scored, assisted or created 200 of the Cavaliers’ 291 points through the first three games of the series. Just think about those numbers.

LeBron shot 14 of 34, and sealed the win by sinking two free throws after Stephen Curry buried his seventh and final 3-pointer with 18.9 seconds left.

Matthew Dellavedova, the point guard who is fast becoming a folk hero in Cleveland, scored 20 points when he was not diving into courtside seats as he pursued loose balls. His effort on the court is note-worthy every time he plays.

“Delly’s the most Cleveland-like Australian I’ve ever met in my life,” said David Blatt, the coach of the Cavaliers. “And if you’re from Cleveland, you know just what I’m talking about.”

Game 4 is scheduled for Thursday night at Quicken Loans Arena. Of course, we’re HustleTweeting about LeBron James, and you’re more than welcome to join the conversation by following The Heyman Hustle on Twitter HERE! You can also post your thoughts on our Facebook page HERE!  If you feel compelled to write us, please do so at HustleOnCrave (at) Gmail.com