Leno Says No To Letterman 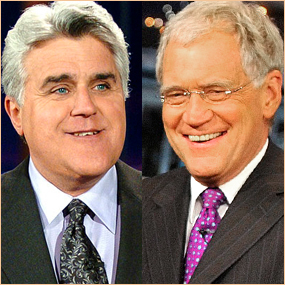 There Will Be Many Surprises Tonight as Dave Signs Off For The Final Time. Frenemy Jay Won’t Be One of Them!

Jay Leno has reportedly turned down the opportunity to share the spotlight with “Tonight Show” competitor David Letterman on tonight’s final edition of “The  Late Show with David Letterman.” In an interview with CNN Money, Letterman’s Executive Producer Rob Burnett said “I don’t think so” when asked whether viewers might see Leno on the finale.

“We invited Jay,” Burnett confirmed, adding that “we would have loved to have Jay on the show. I think we all would have loved that … (but) it didn’t come to pass … That’s Jay’s call. No hard feelings. Everyone has to make their own decisions on that.”

If Leno had said yes for Letterman’s invitation, it would have been the first time he was a guest of Letterman’s since 1992. The possibility of the two men who would succeed Johnny Carson even came up on the “Late Show” recently, when Howard Stern asked Letterman if he had invited Leno.

Burnett said of the last episode, “We have all kinds of stuff planned.” He didn’t reveal many details, but said there will be no sit-down interviews. Instead, there will be some clips from past episodes, some surprise appearances, and a “beautiful ending to the show that Barbara Gaines, one of our executive producers, really marshaled.”

Overall, “I think it probably will come down to the minute that Dave says goodnight,” Burnett said. “Dave is very good at that, and I think no matter what he does, it will have emotional impact.” It won’t be scripted or outlined on cue cards, he said, it’ll come from Letterman’s heart.

To see Letterman at his absolute best under emotional, trying circumstances, CLICK HERE!

Of course, we’re HustleTweeting about David Letterman, and you’re more than welcome to join the conversation by following The Heyman Hustle on Twitter HERE! You can also post your thoughts on our Facebook page HERE!  If you feel compelled to write us, please do so at HustleOnCrave (at) Gmail.com