Tonight! The NBA Scores Big with Lin vs LeBron 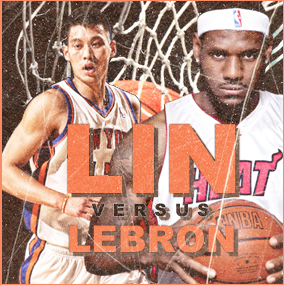 The Rivalry Between The NY Knicks and The Miami Heat Takes on a Whole New Meaning as The NBA Gets Ready For Its Biggest Marquee Superstar Matchup in Years!

For those who grew up hearing the legend of Magic vs Bird, or even the tales of Wilt Chamberlin vs Bill Russell, tonight promises to bring a whole new feud in the National Basketball Association’s folklore.

#LINsanity will invade Miami as Jeremy Lin and the revitalized New York Knicks challenge LeBron James and The Miami Heat on their home court.

While everyone is fantasizing about a SportsCenter moment between Lin and LeBron (hey, we’re doing it right here, so we’re gme uilty of it, too!), the Knicks vs Heat game rekindles a rivalry between LeBron James and Carmelo Anthony that began 10 years ago in a high school game. But tonight’s headlines will be dominated by the #LINsane amount of attention garnered by the NBA’s biggest brand name in LeBron and the hottest pop culture phenomenon to hit professional basketball in years, Jeremy Lin.

“Obviously, LeBron is a great player and a great, great defender. So I’ve just got to be aggressive and not change anything on my end,” Lin said after leading the Knicks to their ninth win in 11 games, a 99-82 victory yersterday over the Atlanta Hawks.

“I know I’m going to end up guarding Lin at some point,” James said, referring to the fact that he will, eventually, be squaring off against the BACK-TO-BACK SPORTS ILLUSTRATED COVER BOY tonight when the Knicks (17-17) face the Heat (26-7).

The Knicks head to Miami with a .500 record thanks largely to their resurgence under Lin. The 23-year-old guard has led New York to a 9-2 record since he starting playing significant minutes earlier this month. In yesterday’s victory over Atlanta,  Lin scored 17 points and handed out nine assists.

Lin’s story, which has been documented on the Hustle HERE …  HERE … and HERE has captured the attention of the sports world in part because of his journey to get here. He was undrafted out of Harvard and had been cut twice in the preseason before being picked up off of waivers by the Knicks.

Lin was stuck on the end of the bench early in his Knicks tenure, playing a total of 22 minutes in his first month with the team. He even spent a one-game stint with the Knicks’ D-League affiliate.

Lin first got a chance to play in part because the Knicks faced a deadline by which they had to guarantee his contract or release him.

So Head Coach Mike D’Antoni decided to give him major minutes Feb. 4. He responded by leading the Knicks to a win over the New Jersey Nets. The team then went on a season-high seven-game winning streak under Lin, with three of those wins coming with superstar players Amare Stoudemire and Carmelo Anthony sidelined.

Tonight, the Knicks will face a Heat team that’s won seven straight games … each of them by at least 12 points.

Of course, we’re HustleTweeting about Lin vs LeBron, and you’re more than welcome to join the #LinSanity by following THE HEYMAN HUSTLE on Twitter HERE or write to us directly at hustleoncrave@gmail.com  Hey, have you checked out the Hustle’s Ultra High Quality You Tube Channel, with  exclusive videos featuring BROCK LESNAR’S “HERE COMES THE PAIN”  … ICE-T AND COCO’s SEX SECRETS … THE ULTIMATE WELTERWEIGHT BAD ASS NICK DIAZ … CONTROVERSIAL TEEN SENSATION TAYLOR MOMSEN … LEGENDARY MMA PIONEER FRANK SHAMROCK … THE WALKING RIOT MISSY HYATT … if you’re not subscribing, you’re missing something … and by the ways cheapos, it’s FREE! Yes, absolutely 100 percent FREE! What are you waiting for? Check it out HERE!