LeBron Meets Lin ... and The Heat's Too Hot For LinSANITY To Take Over Miami 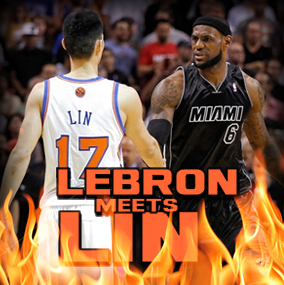 Jeremy Lin is about to face the downside of being New York’s most celebrated athlete. He’s going to learn what it’s like when the New York jump all over you. In the Lin vs LeBron battle that THE HEYMAN HUSTLE PREVIEWED EARLIER THIS EVENING, the NBA’s instantly-famous sensation looked looked a step slow, both mentally and physically. His confidence, like his aim, was off.

For the first time since beginning his LINsane run as the Knicks starting point guard, Lin looked a guy from Harvard who had absolutely no business being on the same basketball court with LeBron James and Dwayne Wade. Looking tired and in need of a break, the Knicks became unglued in the second half before eventually falling 102-88 to the Heat. There’s no arguing the point that Lin, SPORTS ILLUSTRATED’S BACK-TO-BACK COVER BOY, had his worst game since becoming a starter. He missed 10 of 11 shots, scoring 8 points with six rebounds, three assists and eight turnovers.

When pitted against King James and the bad ass Miami Heat, Jeremy Lin just plain sucked tonight.The loss dropped the Knicks record to 17-18 heading into the All-Star break. They are also 8-3 with Lin as a starter.

Carmelo Anthony led the Knicks with 19 points on 7-for-20 shooting. Amar’e Stoudemire took just seven shots and scored 13 points. J.R.Smith added 14 off the bench. “We’re going to be a different team in a month, hopefully,”  Knicks’ Coach Mike D’Antoni said. “We have to be.”

Of course, we’re HustleTweeting about the Heat’s cure for New York’s LinFECTION, and you’re more than welcome to join the conversation by following THE HEYMAN HUSTLE on Twitter HERE or write to us directly at hustleoncrave@gmail.com  Hey, have you checked out the Hustle’s Ultra High Quality You Tube Channel, with  exclusive videos featuring BROCK LESNAR’S “HERE COMES THE PAIN”  … ICE-T AND COCO’s SEX SECRETS … THE ULTIMATE WELTERWEIGHT BAD ASS NICK DIAZ … CONTROVERSIAL TEEN SENSATION TAYLOR MOMSEN … LEGENDARY MMA PIONEER FRANK SHAMROCK … THE WALKING RIOT MISSY HYATT … if you’re not subscribing, you’re missing something … and by the ways cheapos, it’s FREE! Yes, absolutely 100 percent FREE! What are you waiting for? Check it out HERE!