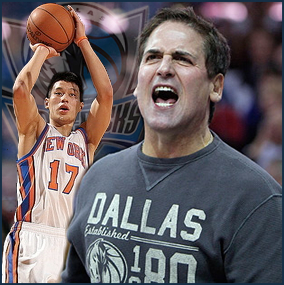 Just a few days ago, Dallas Mavericks Owner Mark Cuban was the latest to get caught up in an LINsane controversy when he stated, “If (the whole Lin Phenomenon) was happening in Charlotte, no one would know. New York is still kind of the mecca of the media for basketball. It’s great for the league, so you’ve got to love it. And Jeremy Lin is a great kid, so I’m happy for him.”

Jeremy Lin and Steve Novak spurred a 32-point fourth quarter that resulted in a 104-97 comeback victory over the Mavericks at Madison Square Garden. Lin scored 28 points and was credited for 14 assists. Novak scored 14 points over the first 4:32 of the fourth quarter to instigate the Knicks’ rally which snapped the Mavericks’ six-game winning streak. Bitches! The Knicks hit five three pointers in the first quarter (three of which came from  J.R. Smith, making his debut with the Knicks after signing Friday) and jumped to a 32-20 lead. Smith finished with 15 points.

The defending champion Mavericks, though, relied on Dirk Nowitzki, who scored 34 points, to claw back into the game. At the 4:03 mark of the third quarter, Dallas (20-12) led by 12.

The Knicks (who are now 16-16), winners of eight out of the last nine games, closed the gap to three to conclude the third with a 14-5 run.

On the Knicks’ first possession of the fourth, Novak hit a 3 to tie the score. The small forward did not score during 11:27 over the first three quarters but scored 14 during a 20-8 run over the first six minutes of the final quarter.

CLICK HERE TO READ ALL ABOUT THE LINsanity THAT IS SWEEPING NEW YORK CITY!

Of course, we’re HustleTweeting about Jeremy Lin, and you’re more than welcome to join the conversation by followin THE HEYMAN HUSTLE on Twitter HERE or write to us directly at hustleoncrave@gmail.com  Hey, have you checked out the Hustle’s Ultra High Quality You Tube Channel, with  exclusive videos featuring BROCK LESNAR’S “HERE COMES THE PAIN”  … ICE-T AND COCO’s SEX SECRETS … THE ULTIMATE WELTERWEIGHT BAD ASS NICK DIAZ … CONTROVERSIAL TEEN SENSATION TAYLOR MOMSEN … LEGENDARY MMA PIONEER FRANK SHAMROCK … THE WALKING RIOT MISSY HYATT … if you’re not subscribing, you’re missing something … and by the ways cheapos, it’s FREE! Yes, absolutely 100 percent FREE! What are you waiting for? Check it out HERE!