The LinSANITY Continues as The Hornets Sting The Knicks at Madison Square Garden! 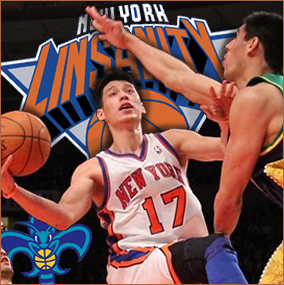 …but Jeremy scores 26 as the Knicks seven-game winning streak comes to an end!

You didn’t think Jeremy Lin was going to lead the Knicks to be undefeated the rest of the season, did you? That would truly be LINsane!

In the losing effort, the NBA’s newest phenom Jeremy Lin had a team-high 26 points, five assists and four steals.

But it wasn’t Lin’s best performance to date, that’s for sure.

As is the case with young point guards who have the ball in their hands so often, Lin struggled to protect the ball and committed a season-high nine turnovers, including eight in the first half. In his last five games, he has 35 turnovers.

When the 23 year ols Lin sat down for his postgame news conference, though, he characteristically took the blame for the loss.

“It was just a lackluster effort on my part coming out and (being) careless with the ball,” he said. “Nine turnovers is obviously never going to get it done from your primary ballhandler. It’s on me in terms of taking care of the ball, and also the game in general.”

The Hornets tried to limit Lin from running the pick-and-roll on the perimeter, and once he got into the lane, they tried to take away his options: defending forward Amar’e Stoudemire or center Tyson Chandler near the basket and making it tough for Lin to take shots.

“Everyone wants to credit me for the last seven games, and I definitely deserve this one on my shoulders. That’s fine with me,” Lin said.

Even with the turnovers, Lin still generated excitement and put the Knicks in a position to tie the score or take the lead late in the fourth quarter. Three times in the final 4:40, Lin scored to keep it a one-possession game. After a steal, he was fouled and made two free throws, cutting the Hornets’ lead to 82-80.

Lin finished 8-for-18 from the field, including 2-for-5 on three-pointers.

His teammates understand it’s going to be a process. It’s not going to be 38-point games, game-winning shots and double-doubles in points and assists every game.

“Teams are keying on him. But it takes time, and it takes games like this in order to learn from your mistakes,” Stoudemire said. “He’s going to watch film now and get better. The more we play, the more we recognize defenses out there, the better it’s going to be become. We’re going to be a pretty good team in the near future.”

Stoudemire added 26 points and 12 rebounds for the Knicks, and Chandler had 10 points and 11 rebounds.

CLICK HERE FOR OUR LOOK AT THE LINSANITY THAT IS SWEEPING NEW YORK CITY!

CLICK HERE FOR AN OUTRAGEOUS STORY ABOUT FLOYD MAYWEATHER AND JEREMY LIN!