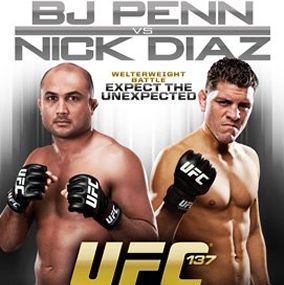 UFC President Dana White Keeps The Peace … But Only Until Tomorrow Night!

Nick Diaz and BJ Penn pushed their foreheads into each other for a moment, as the weigh-ins for UFC 137 delivered a most memorable moment between the rebellious native of Stockton, California and the legendary Hawaiian.

Diaz exited the stage without giving the customary address to the packed crowd at the Mandalay Bay Events Center. Many feel Diaz might be upset with Penn for accepting the fight. Diaz never wanted to face off against Penn because the two were former training partners. Diaz suggested he almost didn’t sign the contract.

“I’m not the one who signed first,” Diaz said. “I look at it like that. I’m not one to fight my friends or people I know. I probably wouldn’t have signed until they let me know it was all a go. They still had to talk me into it.”

Penn, still fired up from the encounter, stayed in place and offered one brief quote.

We’ll be HustleTweeting all weekend about UFC 137, and you’re more than welcome to join the discussion! Follow THE HEYMAN HUSTLE on Twitter HERE or write to us directly at hustleoncrave@gmail.com

HERE’S THE BIG MOMENT FROM THE UFC 137 WEIGH-INS BETWEEN
WELTERWEIGHT BAD ASS NICK DIAZ AND THE LEGENDARY BJ PENN! 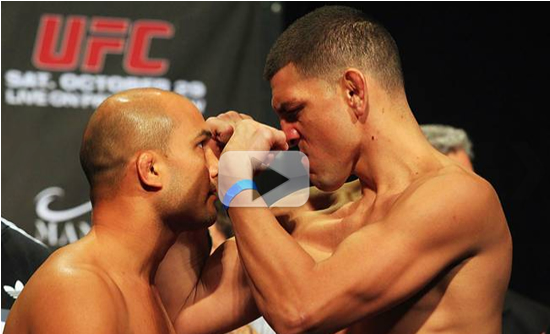