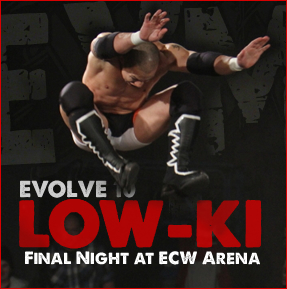 HUSTLE EXCLUSIVE! The Brooklyn-Born Martial Artist Brings A Certain Realism To Sports Entertainment Not Accepted By The Prime Time Promotions!

Low-Ki is a politically incorrect sports entertainer. As a matter of fact, he’ll probably want to bitch-slap the shit out of me the moment he reads that opening sentence. You see, I’ve been a big fan of the man who WWE tagged “Kaval” during his short stay in the world’s most dominant pro wrestling organization. Despite the fact he won the 2nd season of NXT, the 32 year old born Brandon Silvestry just never quite fit in with Vince McMahon’s vision.

CLICK HERE FOR “LOW KI POSITIONS HIMSELF BACK IN THE GLOBAL HEADLINES!”

On Saturday night, January 14th, the EVOLVE promotion ran what is believed to be the final professional wrestling event ever to be held at the bingo hall that sits on the corner of Swanson and Ritner Streets in South Philadelphia, Pennsylvania. The popular name for that converted warehouse? The ECW Arena!

“From the very beginning of the day, Low Ki was high strung and it seemed like he was walking into an Octagon and not a professional wrestling ring,” Sapolsky commented earlier, “and then, in the very first move of the match, Low Ki charged out of his corner like a mad bull and kicked Ahtu right in the skull … and knocked him the fuck out!”

One would think a promoter would be rather upset about this unlikely way to kick off an Internet Pay Per View event. Not Sapolsky.

“Low Ki has opened my eyes to a strong style of professional wrestling that a lot of people in the business may not be able to handle. But there’s an elite group of wrestlers who can really go, so to speak, and Low Ki seems to me to be the one who can help pro wrestling truly EVOLVE in the year 2012!”

You can follow Low Ki’s thoughts on Twitter HERE and keep up with the EVOLVE/DGUSA schedule (which now includes appearances by Low Ki for DragonGateUSA on WrestleMania weekend in Miami and EVOLVE on April 13th in Toronto) at www.DGUSA.TV or on Gabe Sapolsky’s Twitter page HERE

Of course, we’re HustleTweeting about Low Ki, and you’re more than welcome to join the conversation by following THE HEYMAN HUSTLE on Twitter HERE or write to us directly at hustleoncrave@gmail.com  Hey, have you checked out the Hustle’s Ultra High Quality You Tube Channel, with  exclusive videos featuring BROCK LESNAR’S “HERE COMES THE PAIN”  … ICE-T AND COCO’s SEX SECRETS … THE ULTIMATE WELTERWEIGHT BAD ASS NICK DIAZ … CONTROVERSIAL TEEN SENSATION TAYLOR MOMSEN … LEGENDARY MMA PIONEER FRANK SHAMROCK … THE WALKING RIOT MISSY HYATT … if you’re not subscribing, you’re missing something … and by the ways cheapos, it’s FREE! Yes, absolutely 100 percent FREE! What are you waiting for? Check it out HERE!

HERE IT IS!
LOW KI’S ALREADY-INFAMOUS MATCH VS AHTU AT THE ECW ARENA! 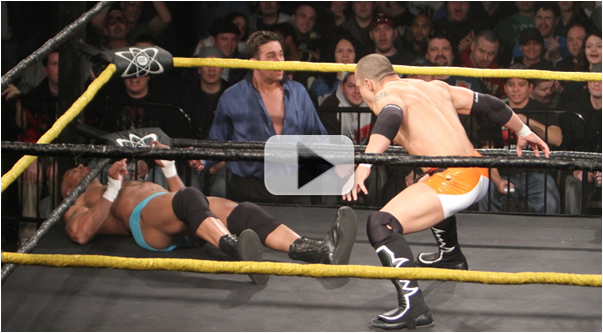