Madonna Concerts Cause Quite The Stir in Miami 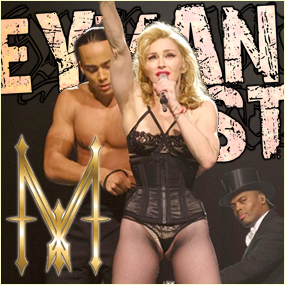 Photos and Video of The Pop Queen’s Wild and Controversial Performance as The MDNA Wraps Up in North America with Two Final Performances in Miami!

Madonna finished out the final two dates of the North American leg of her MDNA tour embroiled in controversy. Some things never change.

The tour, marred by bad press, is still projected to be one of the highest-grossing tours of all time, and yet Madonna hit the stage Monday at the American Airlines Arena a staggering three and a half hours after its scheduled start time. Her opening act, DJ Paul Oakenfold, finished his set at 10 p.m Eastern Time, two full hours after the 8 p.m. kickoff. Madonna didn’t appear until 11:30 p.m. Hey, you wanted Madonna, and that’s exactly what you got.

It’s the same theory our own Hustler De Tuti Hustlers Paul Heyman talked about during the #365 CELEBRATION ON WWE MONDAY NIGHT RAW, when he chastised fans who clamor for the Attitude Era or for ECW, and didn’t like it when PAUL AND CM PUNK MOCKED JERRY LAWLER FOR HAVING A HEAERT ATTACK!
It should be noted that officials for the MDNA tour blamed technical problems for the delay but promised fans that the second Miami show on Tuesday would start on time. What do you think happened?

Madonna began her Tuesday performance at 11 p.m, Eastern Time. Why is anyone surprised?

The Material Girl kicks off the final leg of the tour in Mexico City on November 24 and ends the world tour on December 22 in Cordoba. The RIAA released their list of gold and platinum awards given out during October and the only release by a veteran artist to receive certification was Madonna,as MDNA has finally gone gold, meaning that it has sold 500,000 copies in the U.S. since its March release.

This could end up as the smallest selling studio album of her career. Every one of her studio albums went platinum until 2003’s American Life which, to date, has sold just almost 700,000 copies. Hard Candy (2008) is her second least selling album at 744,000, meaning that MDNA would need to score a huge uptick in sales to get out of the basement.

Of course, we’re HustleTweeting about Madonna, and you’re more than welcome join the conversation by following THE HEYMAN HUSTLE on Twitter HERE or write to us directly at hustleoncrave@gmail.com  Hey, have you checked out the Hustle’s Ultra High Quality You Tube Channel, with exclusive videos featuring OUR WORLD EXCLUSIVE WITH MIKE TYSON … BROCK LESNAR’S “HERE COMES THE PAIN” … ICE-T AND COCO’s SEX SECRETS … TEEN SENSATION TAYLOR MOMSEN … UFC BAD BOY NICK DIAZ … THE WALKING RIOT MISSY HYATT if you’re not subscribing, you’re missing something … and by the ways cheapos, it’s FREE! Yes, absolutely 100 percent FREE! What are you waiting for? Check it out HERE!

By the way, we’re also old school social networkers, so check out our interactive skills on Facebook HERE and even on MySpace HERE.