Madonna Spanks Anderson Cooper on Stage at the Barclays Center, Gives Him a Banana 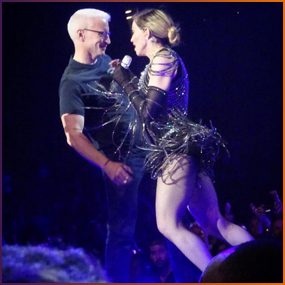 The CNN Anchor Gets Bent Over by Madge!

CNN News Anchor Anderson Cooper got bent over and spanked by Madonna on stage at the Barclays Center in Brooklyn. As Madonna sang “Unapologetic Bitch” as a much-anticipated part of her “Rebel Heart Tour” Cooper joined her onstage and was almost immediately bent over by two of the dancers while Madonna spanked him several times with a hand and a foot before Madonna made an obviously sexual motion on Cooper. “I love you, Madonna,” Cooper said happily. “I love you, too,” the singer replied. “We have a prize,” she continued, “a very special surprise for each evening’s unapologetic bitch.”

Madonna blurted out “It’s a banana!” as she handed one to Cooper. “Now, there are so many things you can do with a banana,” she said while Cooper blushed. “I’m sure you can figure out what to do with it .. It’s nutritious and … it’s nutritious, and it just can really fill you up!”

Of course, we’re HustleTweeting about Madonna Spanking Anderson Cooper, and you’re more than welcome to join the conversation by following the Hustle on Twitter HERE or write to us directly at hustleoncrave@gmail.com Hey, have you checked out the Hustle’s Ultra High Quality You Tube Channel, with exclusive videos featuring the #HUSTLEBOOTYTEMPTATS SUPERMODEL OF THE YEAR … OUR WORLD EXCLUSIVE WITH MIKE TYSON … BROCK LESNAR’S “HERE COMES THE PAIN” … ICE-T AND COCO’s SEX SECRETS … MMA BAD BOY NICK DIAZ … the list goes on and on, so if you’re not subscribing, you’re missing something … and by the ways cheapos, it’s FREE! Yes, absolutely 100 percent FREE! What are you waiting for? Check it out HERE 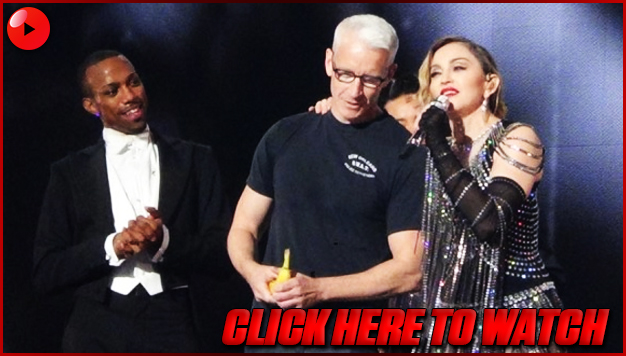