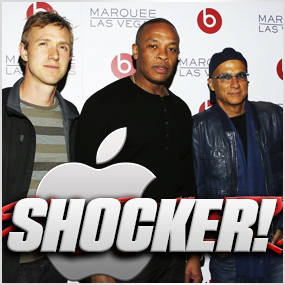 A key player in the entire Apple-Beats deal is leaving the company!

Ian Rogers, a key executive in Apple‘s new music streaming service is leaving the company, just two months after Apple introduced the service and launched a full scale war with Spotify for dominance of the online music market. Rogers was in charge of Apple‘s online radio services, including its Beats 1 station, but shockingly resigned from the company sometime in the last week, Apple confirmed on Friday.

His departure, THE HEYMAN HUSTLE has confirmed through high level sources with direct knowledge of the shakeup, was a jolting surprise to all but a few at Apple, as many saw Rogers as a secret weapon in the Jimmy Iovine / Dre transition into the Apple Music future. It is being reported that Rogers is moving to the UK to work for a company unrelated to Apple and streaming music, with the rumor being he is headed overseas to join a “luxury brand.”

Rogers was one of the main forces behind Beats 1, an Internet radio station that features the former BBC radio D.J. Zane Lowe, among other guest announcers like Elton John, Dr. Dre and Pharrell Williams. A longtime figure in the digital music world who has cultivated close contacts with musicians, Rogers began his career running the Beastie Boys’ website while still in college in the 1990s, and later worked for Yahoo and the digital marketing company Topspin. He joined Beats in early 2013 as the CEO of its planned music service, once code-named Daisy. Beats, best known for its headphone line, was purchased by Apple last year for over $3 billion.

In the hours following this story first breaking, it is still unclear what effect Rogers’ departure would have on Apple’s new music offerings, which include a monthly streaming subscription plan similar to Spotify. The company’s new music line was introduced in late June, with a three-month trial period for new customers. This month Apple said that 11 million people around the world had tried the new service. But the music business is nervously awaiting the end of the trial period, when customers will have to pay for access, to judge its success.

Spotify offers a paid version as well as a free one supported by advertising. Of its 75 million users around the world, 20 million are signed up for paying subscriptions, while the rest listen free. Unlike so many who make such huge moves that effect entire industries, Ian Rogers has so far declined to speak on the record with the media regarding his departure. Of course, we’re HustleTweeting about Apple Music, and you’re more than welcome to join the conversation by following the Hustle on Twitter HERE or write to us directly at hustleoncrave@gmail.com Hey, have you checked out the Hustle’s Ultra High Quality You Tube Channel, with exclusive videos featuring the #HUSTLEBOOTYTEMPTATS SUPERMODEL OF THE YEAR … OUR WORLD EXCLUSIVE WITH MIKE TYSON … BROCK LESNAR’S “HERE COMES THE PAIN” … ICE-T AND COCO’s SEX SECRETS … MMA BAD BOY NICK DIAZ … the list goes on and on, so if you’re not subscribing, you’re missing something … and by the ways cheapos, it’s FREE! Yes, absolutely 100 percent FREE! What are you waiting for? Check it out HERE