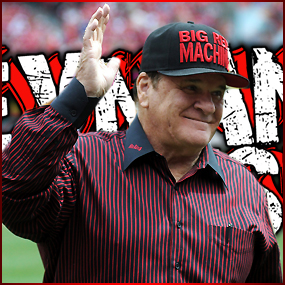 The most prolific hitter in the game’s history is not allowed into the Hall of Fame, as the new commissioner makes a most unpopular decision!

Pete Rose is not going into the Baseball Hall of Fame, at least not anytime soon. Rob Manfred, the commissioner of Major League Baseball, has decided not to lift the permanent ban imposed on Rose in 1989. The decision was confirmed by the commissioner’s office on Monday after word had leaked out the ban was to remain intact. It is being reported Manfred had planned to inform Rose of his decision on Thursday, but after The New York Times officially inquired on the topic this morning, Manfred called Rose to give him the bad news.

According to multiple reports, and confirmed to THE HEYMAN HUSTLE by several sources in Major League Baseball, Manfred met with Rose at MLB‘s headquarters on Park Avenue in New York City. At the time of their meeting, Rose was promised a decision by the end of the year.

Rose was banned in 1989  after MLB concluded that he had bet on baseball games while managing the Cincinnati Reds and that some of the bets had been placed on his own team. At the time, Rose insisted he had not bet on the sport, although in agreeing to the ban he implicitly acknowledged wrongdoing on his part.

In the years that followed, Rose continued to deny he had wagered on baseball. But in a 2004 autobiography, he finally confessed to actually betting on baseball, and to betting on the Reds as well, although he insisted that he had never bet on his own team to lose.

Other evidence emerged over time that pointed to Rose’s betting on baseball not just as a manager but also as a player. All the while, Rose, whose long playing career included 4,256 base hits, three World Series championships, three batting titles and 17 selections to the All-Star Game, has never given up hope that the ban would eventually be lifted, allowing him to appear on a Hall of Fame ballot.

He first applied for reinstatement in 1992, just three years after being barred, but Fay Vincent, who was then baseball’s commissioner, did not act on the request. In 1997 Rose applied again, with the application this time going to Bud Selig. Once again, the request to reinstate was declined.

The position of Major League Baseball was, and has been, that Rose had violated one of baseball’s basic tenets … that any player, coach, manager or team executive who bets on the sport is threatening the game’s integrity. In addition, Rose, in retirement, had often resorted to the headfirst, pugnacious style he famously displayed as a player, not always seeming contrite about what he had done wrong.

When Manfred took over as commissioner after serving as Selig’s deputy for nearly two decades, he seemed to take a quick, and genuine, interest in Rose’s case.

By March, lawyers for Pete Rose had filed his third appeal for reinstatement. Then came the face-to-face meeting between Manfred and Rose in late September, and a promise by the new commissioner to reach a decision by the end of the year.

That decision has now gone against Pete Rose. According to a report that has been posted by The New York Times, Manfred was not persuaded by Pete Rose’s answers at their September meeting and believed he still had not told the whole truth about the extent of his gambling as a player and manager. And therefore Major League Baseball would continue the ban, precluding Rose from entering the Hall of Fame.

We’re HustleTweeting about Pete Rose, and you’re more than welcome to join the conversation by following the Hustle on Twitter HERE or write to us directly at hustleoncrave@gmail.com Hey, have you checked out the Hustle’s Ultra High Quality YouTube Channel, with exclusive videos featuring the #HUSTLEBOOTYTEMPTATS SUPERMODEL OF THE YEAR … OUR WORLD EXCLUSIVE WITH MIKE TYSON … BROCK LESNAR’S “HERE COMES THE PAIN” … ICE-T AND COCO’s SEX SECRETS … MMA BAD BOY NICK DIAZ … the list goes on and on, so if you’re not subscribing, you’re missing something … and by the ways cheapos, it’s FREE! Yes, absolutely 100 percent FREE! What are you waiting for? Check it out HERE!