The Man of Steel Teases Before The Dark Knight Rises 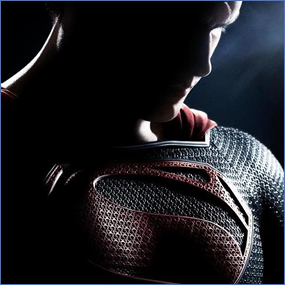 Warner Bros takes a big gamble by releasing one bad ass Superman teaser trailer with two distinct voice overs in theatres right before the showing of the epic end of the Batman saga!

Superman is getting a makeover.

In the new adaptation of DC Comics’ number one star, Superman “Man of Steel” is produced by “The Dark Knight Rises” director Christopher Nolan and directed by Zack Snyder (who made “300” and “Watchmen” ), so this promises to reboot Clark Kent and his alter-ego’s characters in a more modern context than what we have seen him portrayed in before.

Playing Superman/Clark Kent this time around is Henry Cavill, a British actor originally up for this part when McG was set to direct the movie that became “Superman Returns.” He is best known for his roles in “Immortals” and the Showtime television series “The Tudors.” From what we see in this teaser trailer, Cavill’s Superman is a far more rugged individual and nowhere as clean cut as Brandon Routh was when he played him in “Superman Returns.” Much like Christian Bale’s darker version of Bruce Wayne/Batman posted a stark contrast to previous versions (George Clooney, Michael Keaton, and even the campy 1960’s TV series starring Adam West), it appears Superman fans who fondly remember Christopher Reeves’ portrayal of the last survivor of Krypton will be introduced to a far darker Man of Steel.

The film hits theatres on June 14, 2013, but our HustleTweeters are talking about Man of Steel now, and you’re more than welcome to join the conversation byy following THE HEYMAN HUSTLE on Twitter HERE or write to us directly at hustleoncrave@gmail.com  Hey, have you checked out the Hustle’s Ultra High Quality You Tube Channel, with  exclusive videos featuring BROCK LESNAR’S “HERE COMES THE PAIN”  … ICE-T AND COCO’s SEX SECRETS … THE ULTIMATE WELTERWEIGHT BAD ASS NICK DIAZ … CONTROVERSIAL TEEN SENSATION TAYLOR MOMSEN … LEGENDARY MMA PIONEER FRANK SHAMROCK … THE WALKING RIOT MISSY HYATT … if you’re not subscribing, you’re missing something … and by the ways cheapos, it’s FREE! Yes, absolutely 100 percent FREE! What are you waiting for? Check it out HERE!