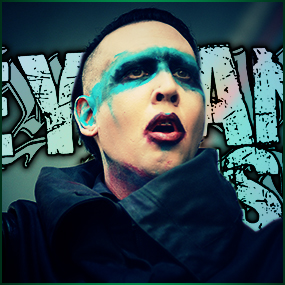 Marilyn Manson invaded MAPFRE Stadium in Columbus, Ohio to support his new album “The Pale Emperor” which was released on January 20th by Manson’s own label, Hell, etc,  in a joint venture with Cooking Vinyl and Loma Vista Recordings. Manson reportedly collaborated on the new album, his first in over two years, with noted film composer/producer Tyler Bates (“Guardians Of The Galaxy”, “300”, “The Watchmen”), who also joined Manson as a member of his band on the recent “The Hell Not Hallelujah Tour”, alongside longtime bassist Twiggy Ramirez, Gil Sharone on drums and Paul Wiley on guitar.

In an interview with Rolling Stone magazine, Manson revealed that many of the songs on “The Pale Emperor” were recorded in a single take. “It’s dirty,” he said, “like the dirt under my nails, like someone who has dug a grave.” Of course, we’re HustleTweeting about Marilyn Manson, and you’re more than welcome to join the conversation by following The Heyman Hustle on Twitter HERE! You can also post your thoughts on our Facebook page HERE!  If you feel compelled to write us, please do so at HustleOnCrave (at) Gmail.com

CLICK ON THE PICS BELOW TO SEE THE ENTIRE HUSTLE EXCLUSIVE PHOTO GALLERY FEATURING MARILYN MANSON IN CONCERT!