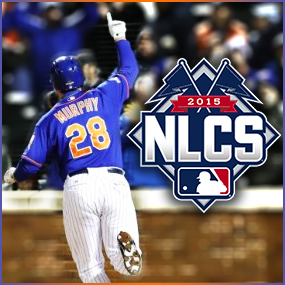 On a cold, cold night at Citi Field …

…. the New York Mets continued their winning ways, capturing game one of the National League Championship Series by defeating the Chicago Cubs 4-2. It was a big time time performance by The Dark Knight, as he was pitching a perfect game into the fifth inning, before the Cubs finally touched wood-to-ball. By the time he left the mound in the eighth inning, Harvey had held the Cubs to two runs on four hits. He walked two but struck out nine. That was enough for Daniel Murphy, he biggest hero in New York baseball since the retirement last year of the beloved Derek Jeter, to continue his bad ass offensive streak on this chilly Saturday night at Citi Field, hitting a solo home run. Travis d’Arnaud also smacked in a home run, while Curtis Granderson drove in two runs, including the go-ahead run in the fifth, as the Mets beat the Cubs for the first time this season. And they picked the perfect time to do it!

Of course, we’re HustleTweeting about the New York Mets, and you’re more than welcome to join the conversation by following the Hustle on Twitter HERE or write to us directly at hustleoncrave@gmail.com Hey, have you checked out the Hustle’s Ultra High Quality You Tube Channel, with exclusive videos featuring the #HUSTLEBOOTYTEMPTATS SUPERMODEL OF THE YEAR … OUR WORLD EXCLUSIVE WITH MIKE TYSON … BROCK LESNAR’S “HERE COMES THE PAIN” … ICE-T AND COCO’s SEX SECRETS … MMA BAD BOY NICK DIAZ … the list goes on and on, so if you’re not subscribing, you’re missing something … and by the ways cheapos, it’s FREE! Yes, absolutely 100 percent FREE! What are you waiting for? Check it out HERE