Mayweather vs Pacquiao Tickets To Be On Sale Tomorrow 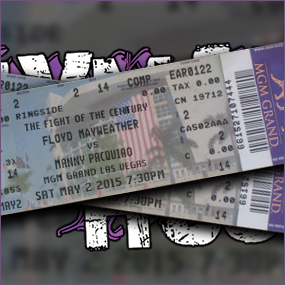 A week and a half to go, and tickets are just now about to go on sale. Here’s the inside story!

Tickets for the Floyd Mayweather vs Manny Pacquiao boxing match, the single richest fight in history, will finally go on sale, only nine days before the actual event, later today for the arena and closed-circuit locations at MGM Resorts International properties along the Las Vegas Strip after promoters Top Rank and Mayweather Promotions and the MGM signed the site contract.

Bob Arum, the controversial boxing promoter who represents Pacquiao (and who once reppred Mayweather, a long long time ago) commented, “It was a battle, but finally everybody came together.”

This is just one of the many problems the fight has encountered, as detailed in THE HEYMAN HUSTLE’S STUNNING EXPOSE OF THE CONSPIRACY THEORIES BEING TRUE IN MAYWEATHER VS PACQUIAO!

The multitude of problems conflicting Mayweather Promotions with Top Rank and also the MGM over ticket distribution to the May 2 event at MGM Grand Garden Arena threatened the very existence of the fight itself.  According to several insiders, a great number of these issues were ironed out during a Wednesday morning conference call involving Arum, Top Rank President Todd duBoef, Mayweather adviser Al Haymon and Leslie Moonves, the President and CEO of CBS Corp., which has a contract with Mayweather. THE HEYMAN HUSTLE has spoken with several sources who all have one central theme in common … Moonves made the fight happen, and Moonves saved the day on the conference call as well.

The rest of the tickets are controlled by Mayweather Promotions, Top Rank and the MGM Grand, which will distribute the tickets, which according to several reports “everyone has to pay for” to their customers, the fighter camps, the fight sponsors, pay per view production and distributors HBO and Showtime,   and the brokers with whom they do business. This will break all sorts of the records, not just for ticket sales but for the secondary market as well.

“This has been a very complex event, and we are pleased to have resolved the outstanding issues,” said Richard Sturm, President of Entertainment and Sports for MGM Resorts International. “We look forward to delivering an incredible event weekend, like only Las Vegas can.”

Arum claims the hold-up in getting the deal signed was that there were a number of issues that were agreed to in the contracts between Mayweather Promotions and Top Rank, including the distribution of tickets. However, Arum said that when Top Rank received the site agreement, it was much different than what had been negotiated.

Arum is on record saying he felt Haymon and the MGM were conspiring against him and trying to take more tickets than they were entitled to under the deal that Top Rank and Mayweather Promotions signed in February.

“We were resolute that we were going to hold on to everything we had negotiated with Mayweather Promotions and they weren’t going to use the relationship with MGM to deprive us of our rights,” Arum stated. “Ultimately, that’s how the deal was made. We protected Manny and ourselves, and we weren’t asking for anything we didn’t negotiate. We had a deal with Mayweather Promotions, and then they used the MGM to try to erode our rights. And we stood steadfast and we wouldn’t let that happen, and finally we made a deal, a correct deal, and the fight is going ahead. It’s as simple as that. We weren’t going to allow anyone to push us around. We didn’t want more than we were entitled to or want anything extra. We wanted everyone to live up to the deal we made. I have to really commend my guys for standing firm, and I want to thank Les Moonves for being a rational person and poised through this whole thing and for not letting us be pushed around.”

Of course, we’re HustleTweeting about Mayweather vs Pacquiao, and you’re more than welcome to join the conversation by following The Heyman Hustle on Twitter HERE! You can also post your thoughts on our Facebook page HERE!  If you feel compelled to write us, please do so at HustleOnCrave (at) Gmail.com