McDonald's Is Dramatically Changing Their Hamburgers 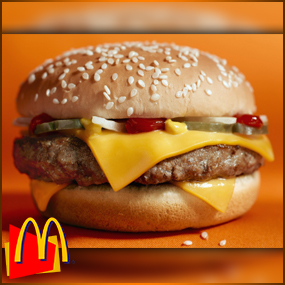 Reacting to six quarters of declining sales, the world’s most famous fast food chain is changing its most popular item … but is it a recipe for success?

McDonald’s is aggressively addressing its downturn in the marketplace. The Golden Arches is coming out with a bigger quarter-pound patty that will weigh 4.25 ounces when raw, and will also have a different shape, according to the report. The current patties weigh 4 ounces when raw and shrink to 2.8 ounces after cooking.

McDonald’s also revealed that it would be toasting its buns for an extra five seconds, making them 15 degrees warmer, and changing how the beef patties are seared and grilled in order to make them juicer.

“These little things add up to big differences for our customers,” the company noted at a recent conference in New York City. “We’re recommitting to tastier food across the menu.”

These changes are a direct result of six straight quarters of same-store sales declines in the US, where the chain is battling a pervasive public perception that its food is unhealthy and over-processed. The company has also been hurt by a series of food-safety scandals in Asia, which contributed to a 15% loss in net income last year. Meanwhile, McDonald’s relationship with franchisees, who operate 81% of its restaurants globally, is at an all-time low. Employees have also been striking for higher pay and better working conditions.

Of course, we’re HustleTweeting about McDonald’s, and you’re more than welcome to join the conversation by following The Heyman Hustle on Twitter HERE! You can also post your thoughts on our Facebook page HERE!  If you feel compelled to write us, please do so at HustleOnCrave (at) Gmail.com