Mets Even The Subway Series, Beat The New York Yankees 8-2 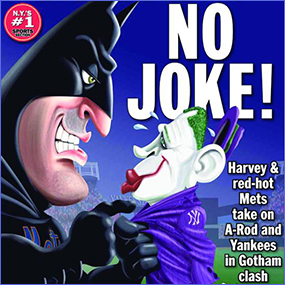 Matt Harvey Is One Out Shy of a Complete Game as The Bronx Bombers Are Clobbered in Game 2 of The Subway Series!

Matt Harvey put on a clinic for 8 2/3 innings as The New York Mets have evened The Subway Series 1-1 with a victory over The New York Yankees 8-2 in the Bronx. Kevin Plawecki hit his first major league homer and drove in three runs, and Lucas Duda and Eric Campbell also connected off CC Sabathia who falls to 0-4. On the flipside, Harvey moves to 4-0, as he lead the Mets to avenge their 11-game winning streak being broken when THE YANKEES DEFEATED THE METS IN GAME 1 OF THE SUBWAY SERIES!

Harvey, the young hot shot pitcher from Connecticut who grew up a Yankees fan, is coming off Tommy John Surgery, and his pitching was the most celebrated performance in the team’s 12th win in 13 games.Harvey struck out seven and yielded the red hot Mark Teixeira‘s third homer of the series, a leadoff drive in the seventh.

The split crowd of 47,909 went crazy for Harvey, nicknamed The Dark Knight‘s first time facing baseball’s number one villain when the pitcher struck out Alex A-ROD Rodriguez with an 89 mph curveball after Rodriguez fouled off a 97 mph fastball. Harvey also struck out Rodriguez with heat in the ninth.

“That’s what baseball’s all about,” Rodriguez said. “He challenged me with a 98 mph fastball and threw it right by me.”

Of course, we’re HustleTweeting about The Subway Series, and you’re more than welcome to join the conversation by following The Heyman Hustle on Twitter HERE! You can also post your thoughts on our Facebook page HERE!  If you feel compelled to write us, please do so at HustleOnCrave (at) Gmail.com