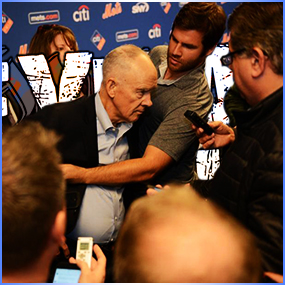 The General Manager of the New York Mets, Sandy Alderson fainted and fell to the floor this morning after announcing Mets Manager Terry Collins‘ two year contract extension.
The 67-year old former Marine was conscious and was quickly helped to his feet. He walked out of the press conference room under his own power.

The Mets said that Alderson, the GM since 2010, became light-headed after skipping breakfast and talking under the hot lights set up for TV cameras at Citi Field.. He was checked out by team trainers and ate something after collapsing. A team source confirmed Alderson will likely see his personal doctor as a precaution.

Three days after the Mets lost Game 5 to World Series, blowing a 2-0 lead in the ninth innings, Alderson, announced the team had re-signed Collins as manager.

CLICK HERE TO CHECK OUT OUR STORY ON MATT HARVEY!

CLICK HERE TO CHECK OUT OUR STORY ON BARTOLO COLON!

He was standing in a group of reporters when he suddenly went quiet and began to fall. Reporters and photographers broke his fall and guided him to the ground. After a minute, Alderson was talking and sitting up.
“Where were we” he cracked before being led out of the room by Mets employees.

Of course, we’re HustleTweeting about Sandy Alderson, and you’re more than welcome to join by following the Hustle on Twitter HERE or write to us directly at hustleoncrave@gmail.com Hey, have you checked out the Hustle’s Ultra High Quality You Tube Channel, with exclusive videos featuring the #HUSTLEBOOTYTEMPTATS SUPERMODEL OF THE YEAR … OUR WORLD EXCLUSIVE WITH MIKE TYSON … BROCK LESNAR’S “HERE COMES THE PAIN” … ICE-T AND COCO’s SEX SECRETS … MMA BAD BOY NICK DIAZ … the list goes on and on, so if you’re not subscribing, you’re missing something … and by the ways cheapos, it’s FREE! Yes, absolutely 100 percent FREE! What are you waiting for? Check it out HERE!