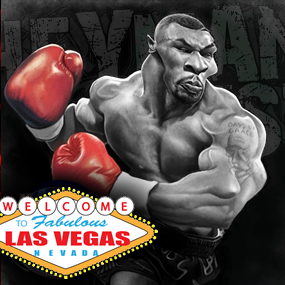 The Undisputed King of Controversy Plans a Knockout Performance at the MGM Grand in April!

“Mike Tyson: Undisputed Truth — Live on Stage” will run April 13-18 in the 740-seat Hollywood Theatre, offering insight into and by Iron Mike himself, telling what it’s like to have been feared, reviled and pitied in a career that will go down as one of the most memorable in boxing history.

The director and co-writer (with Tyson’s wife, Kiki), is playwright Randy Johnson, creator of “Elvis the Concert” and “One Night With Janis Joplin.” Tyson has already won acclaim for telling his own story on screen in “Tyson,” the 2009 documentary by James Toback.

In it, as LA Times film critic Kenneth Turan wrote, virtually the only voice heard was that of the fallen champ, “holding you spellbound with his thoughts on his past. The result is as gripping as a title fight and as mesmerizing as a conversation with a cobra. You may not be happy with everything said, but you will not be bored.”

Johnson said Friday that he avoided seeing “Tyson,” opting instead to spend many hours talking with his subject, then crafting a script and a sequence that he said will allow for a written question or two from the audience.

Video and live music will augment the evening. “It’s a theater piece, not a lecture, but a real one-man show,” Johnson said, along the lines of stage monologue evenings such as Carrie Fisher’s “Wishful Drinking” and William Shatner’s “Shatner’s World: We All Just Live In It.”

After the Las Vegas run, Johnson said, “we’ll review what happened, look at the next steps, and move forward. The hopes for this are to tour the world — the fan base is staggering.”

Don’t look for any onstage shadowboxing, the director said. “Mimicking boxing would be very cheesy. We’re keeping this authentic.”

Authentic it is. The MGM Grand’s Arena is where Tyson bit off a piece of Evander Holyfield’s ear.

Of course, we’re HustleTweeting about Iron Mike in Vegas, and you’re more than welcome to join the conversation by following THE HEYMAN HUSTLE on Twitter HERE or write to us directly at hustleoncrave@gmail.com  Hey, have you checked out the Hustle’s Ultra High Quality You Tube Channel, with  exclusive videos featuring BROCK LESNAR’S “HERE COMES THE PAIN”  … ICE-T AND COCO’s SEX SECRETS … THE ULTIMATE WELTERWEIGHT BAD ASS NICK DIAZ … CONTROVERSIAL TEEN SENSATION TAYLOR MOMSEN … LEGENDARY MMA PIONEER FRANK SHAMROCK … THE WALKING RIOT MISSY HYATT … if you’re not subscribing, you’re missing something … and by the ways cheapos, it’s FREE! Yes, absolutely 100 percent FREE! What are you waiting for? Check it out HERE!

CLICK ON THE PICS BELOW TO SEE OUR EXCLUSIVE PHOTOS OF MIKE TYSON
MEETING SOME OF HIS PRO WRESTLING HEROES AT WRESTLEREUNION! 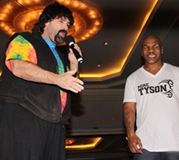