When It Comes To Nathan's Hot Dogs, "Bigger" Is No Longer "Better!" 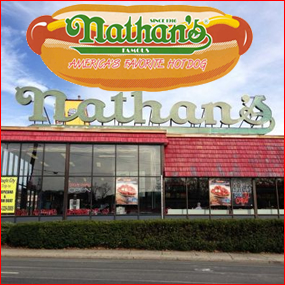 An Iconic Landmark in Yonkers, New York Is About To Undergo A Major Change!

I may get fired for saying this, but this is one story on our website that really should be written by our very own Hustler De Tuti Hustlers Paul Heyman. A landmark close to where The Mad Scientist grew up, Nathan’s Famous Hot Dogs will close November 25th when it begins tearing down its landmark building at 2290 Central Park Avenue in Yonkers, New York.

In its place will be a new Nathan’s, about a third the size. Plus more.

Nathan’s President Wayne Norbitz stated he expects the restaurant to be closed for about a year during the transition. “The menu will be the same … but the restaurant will be much smaller … Right now, that is a gigantic facility.”

The owner of the plaza wear Nathan’s has housed hot dog eaters and arcade game players for decades, New Rochelle-based Amusement Consultants, is revamping the plaza and adding a new group of stores, including a CVS. As for Nathan’s, the new restaurant will feature a drive-thru window and take up about 3,500 square feet, instead of the estimated 10,000-square-foot current restaurant, built in 1965.

“The new (Nathan’s)  will be the size of a very large McDonald’s,” Norbitz said.

We’re HustleTweeting about Nathan’s in Yonkers, and you’re more than welcome to join the conversation by following THE HEYMAN HUSTLE on Twitter HERE or write to us directly at hustleoncrave@gmail.com  Hey, have you checked out the Hustle’s Ultra High Quality You Tube Channel, with exclusive videos featuring OUR WORLD EXCLUSIVE WITH MIKE TYSON … BROCK LESNAR’S “HERE COMES THE PAIN” … ICE-T AND COCO’s SEX SECRETS … TEEN SENSATION TAYLOR MOMSEN … UFC BAD BOY NICK DIAZ … THE WALKING RIOT MISSY HYATT if you’re not subscribing, you’re missing something … and by the ways cheapos, it’s FREE! Yes, absolutely 100 percent FREE! What are you waiting for? Check it out HERE!