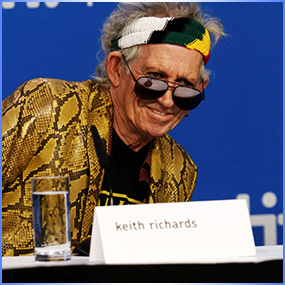 The Rolling Stones’ Guitarist is spotlighted in this fascinating new documentary!

So, who is the greatest, the most iconic guitar player in rock n roll history? Is it Jimi Hendrix? Is it Angus Young? Could the argument be made for Eddie Van Halen? Or Jimmy Page? Is there something to be said for Chuck Berry? Or is the answer, quite simply, Keith Richards?

Netflix‘s new documentary “Keith Richards: Under The Influence” is a fascinating look at and into the legendary guitarist for The Rolling Stones and his music. Despite the documentary’s name, “Under the Influence” has nothing to do with drugs. alcohol and Richards’ infamous appetite for them. Now that would be one helluva story, wouldn’t it? Instead, it focuses on Richards’ addiction to music, which he calls “a center. It’s something that binds people together, through centuries, through millennia.”

The documentary has a ton of technical information in it, with people like Tom Waits and composer / musical director Steve Jordan discussing, at length, the technical aspects of Richards’ guitar playing. The movie lacks a true theme, much like Richards is a combination of many different personalities all living within the same musical genius. The first part of the movie is a look into the creation of his music, Then the movie takes a wild turn, in which it discusses Richards’ love for the blues. And then the movie goes hog-wild in its attempt to capture “Rock Star Keith Richards” or at least “A Rock Legend at 71” if that makes any sense. And it may not. Because at times, this detailed-oriented-in-the-technical-aspect documentary doesn’t make sense. But neither does Keith half the time.

Which is why this documentary is just so damn fascinating!

Of course, we’re HustleTweeting about Keith Richards, and you’re more than welcome to join the conversation by following the Hustle on Twitter HERE or write to us directly at hustleoncrave@gmail.com Hey, have you checked out the Hustle’s Ultra High Quality You Tube Channel, with exclusive videos featuring the #HUSTLEBOOTYTEMPTATS SUPERMODEL OF THE YEAR … OUR WORLD EXCLUSIVE WITH MIKE TYSON … BROCK LESNAR’S “HERE COMES THE PAIN” … ICE-T AND COCO’s SEX SECRETS … MMA BAD BOY NICK DIAZ … the list goes on and on, so if you’re not subscribing, you’re missing something … and by the ways cheapos, it’s FREE! Yes, absolutely 100 percent FREE! What are you waiting for? Check it out HERE