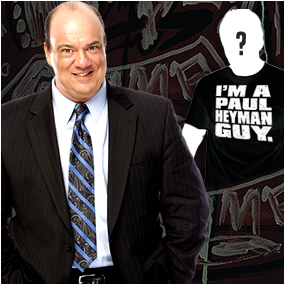 It appears as though WWE needs to brace itself. Following Brock Lesnar’s epic victory over Triple H at Extreme Rules, our very own Hustler De Tuti Hustlers Paul Heyman is set to make history … AGAIN!

WWE is about to get a little more EXTREME! Our boss, the Hustler De Tuti Huslters Paul Heyman is keeping quiet on this for the moment, but it appears as though we’re about to be introduced to Brock Lesnar and CM Punk’s new stablemate!

Might there be another Paul Heyman guy waiting in the wings?

While CM Punk languishes in self-imposed exile and Brock Lesnar prepares to battle Triple H inside a steel cage, rumors have begun swirling that the mad scientist is looking to expand his ranks, and actively scouting for a third client inside the WWE locker room. The rumors are admittedly just that at this point, but the WWE Superstars and Divas are still abuzz over the possibility of Heyman’s ranks increasing by one.

Despite Heyman’s firebrand reputation, it would appear there is no shortage of Superstars clamoring for his representation, which makes sense given the visibility an association with the mad scientist brings.

“Would I like to be represented by Paul Heyman? Of course,” NXT Superstar Corey Graves said. “It doesn’t mean you’re gonna be liked. You’re not gonna make any friends … but you can’t deny that if you’re a Paul Heyman guy, the world’s going to talk about you.”

United States Champion Kofi Kingston also weighed in with a response that some may find a bit surprising. “I think anyone who is not interested in having Paul Heyman as a representative would be foolish. Look at his track record and what he’s done for guys like Brock Lesnar. You see how much of an asset he’s been for CM Punk. [Heyman] is a genius.”

Others are more wary than anything over the potential growth of Heyman’s cult of personality. Take the recently returned Miz, for example. “What’s in it for me? I’ll answer a question with a question, because while Heyman definitely has something to offer, I just don’t know what he has to offer to me.”

As for Paul Heyman himself, he responded with an uncharacteristic silence when pressed for comment. Third man or not, it would appear he has the WWE Universe talking regardless — which of course, is just the way he likes it.

Of course, we’re HustleTweeitng about join the conversation by following us on twitter HERE or write us directly at hustleoncrave@gmail.com  Hey, have you checked out the Hustle’s Ultra High Quality You Tube Channel, with exclusive videos featuring OUR WORLD EXCLUSIVE WITH MIKE TYSON … BROCK LESNAR’S “HERE COMES THE PAIN” … ICE-T AND COCO’s SEX SECRETS … TEEN SENSATION TAYLOR MOMSEN … UFC BAD BOY NICK DIAZ … THE WALKING RIOT MISSY HYATT if you’re not subscribing, you’re missing something … and by the ways cheapos, it’s FREE! Yes, absolutely 100 percent FREE! What are you waiting for? Check it out HERE!